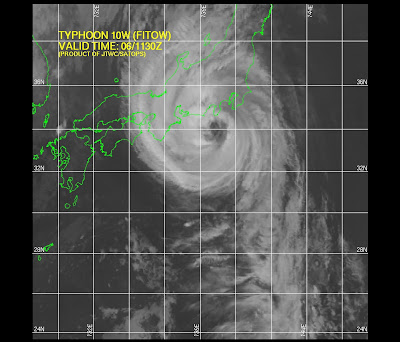 Typhoon Fitow underwent a slight weakening in the last 6 hours and now has surface winds in the 75 knot/86 mph/139 kmh. It has made the alteration to the north and is now tracking North-Northeastward at 15 knots/17 mph/28 kmh. As it approaches the coast it will continue to be influenced by a mid-latitude trough over the Korean Peninsula. Some acceleration of speed over the ground is expected.

There is some disagreement with the computer models. Forecast consensus has Fitow making a transition to an extratropical cyclone which should see the centre weaken considerably and then track in a poleward direction. Models disagree and actually suggest a more eastward track. Given the surrounding influences and the weakening expected as the extratropical transition occurs, I would disagree with the computer models and suggest that Fitow will track along the length of Honshu as it weakens.

Right now the eye, which has developed ragged banding, is making landfall. Tokyo and all other cities within the influence are experiencing heavy rains and high winds.

We have reports from people in Tokyo in the comments section of the last update which describe the conditions there. Elevated trains have stopped running and some services have been disrupted, but at last report (Will and Rev) pizza deliveries are continuing.