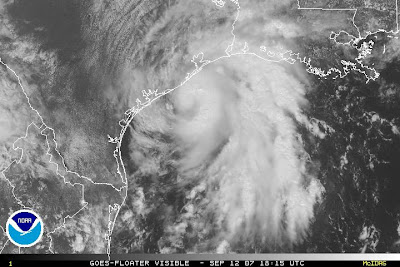 The wave of low pressure in the Gulf of Mexico has suddenly become organized and has increased in strength to become a tropical storm. 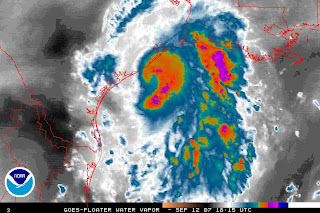 There is little likelihood that Tropical Storm Humberto will strengthen beyond that level, however, wind shear is low and water temperatures are high giving it the right conditions to build. Given its proximity to the coast, wind speeds should remain in the 45 knot/52 mph/83 kmh range with some possible slight building.

The problem is the moisture Humberto will drop once it crosses the coast tonight. Heavy rains with amounts of 5 to 10 inches could cause serious flooding in some areas. Isolated areas could receive as much as 15 inches in one rainfall. Storm surges of 2 - 3 feet are expected along the coast from the middle Texas coast to the southwestern coast of Louisiana.

The storm centre is located 70 miles South-Southwest of Galveston TX and 145 miles East-Southeast of Corpus Christi TX. Humberto is tracking North at about 5 knots/6 mph/10 kmh. 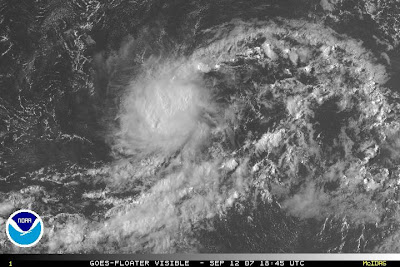 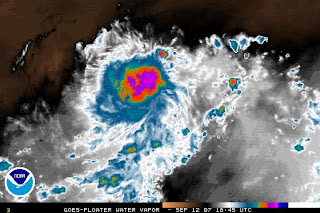 This system will probably be declared a tropical storm later tonight as it starts to intensify. The wind shear is low and expected to decrease. Water temperatures are above normal ahead of its path. Everything combined, this system should develop over the next 36 hours to become at least a Category 1 hurricane.

Computer models are calling for the system to maintain its speed of advance and remain a tropical storm. The National Hurricane Center feels it will slow down somewhat and given the conditions ahead of the system strengthening to hurricane force seems almost inevitable. (But it's weather and something could change that).

If this is the next Tropical Storm to develop, it will be "Ingrid".