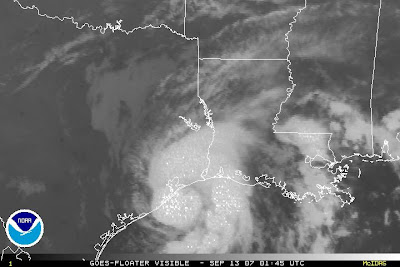 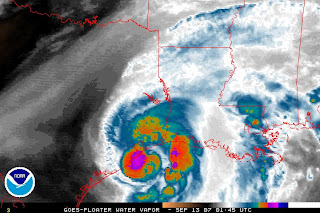 Tropical Storm Humberto has actually gained some strength since the last report and it is expected to intensify even further. If there is a saving grace to this system it is that, since its formation, it will have had very little time over water before it makes landfall and will probably not become a hurricane.

The outer rain bands are already extending well inland and the system has a well-defined spiral convective band. The effects of this system are being felt as far east as New Orleans. No eye wall

has developed yet and since this storm should make landfall soon, there is little chance it will develop one. There is another problem which I'll discuss after more observation information.

A short wave trough, currently over the southwestern US is expected to push further to the southeast which will force Humberto further to the Northeast. The computer models tracks indicate that Humberto will actually turn and hang around the Gulf coast.

Forecast estimated sustained winds over the next 24 hours rise to 55 knots/63 mph/102 kmh after which winds should decrease as Humberto moves across the upper Texas coast early Thursday. Rain expectations remain the same at about 5 to 10 inches in most areas with

isolated areas receiving up to 15 inches.

The problem now is that this system is likely to spawn tornadoes in areas of Texas and Louisiana.
Posted by Dave at 19:59 Recommend this Post