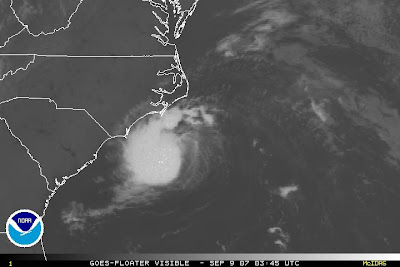 Tropical Storm Gabrielle has undergone some transformation as it tracks in to an imminent landfall. 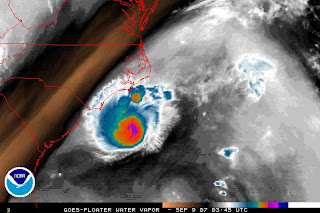 There was a strong convective burst which included a supercell. Supercells are an extremely intense and dangerous storm. When associated with a larger convective storm, the larger storm feeds the mesocyclone by forcing air up the verticle axis. The problem, simply put, is that supercells, although small, contain extremely high winds, lightning and hail and are generally associated with tornados.

Gabrielle is extremely difficult to read although some winds were recorded at 45 knots/52 mph/83 kmh. The storm is estimated to be tracking Northwest at about 10 knots/12 mph/19 kmh. The centre of the storm is obscured by cloud generated from the supercell so the track may be a bit off. At present the National Hurricane Center is sticking with their forecast track although they now place it further west than originally expected.

Gabrielle should make a swing to the North as it passes around a deep-layer ridge settled in the Atlantic. At that time, after making landfall somewhere between North Carolina and Virginia.

Now over the Gulf Stream, Gabrielle will begin to gain some strength although there is little likelihood it will become anything more than a tropical storm as it heads back to sea.

*******
There is other activity being watched. A low in the Gulf of Mexico is being monitored for possible storm formation and a tropical wave off the Cape Verde Islands, which has not had much development, is being monitored closely.