Five Things for Dems to Keep in Mind When Gen. Petraeus Testifies on Iraq

Here's what will definitely happen when Gen. David Petraeus testifies before Congress next week: he'll assert that the surge has reduced violence in Iraq -- as long as you don't count Sunnis killed by Sunnis, Shiites killed by Shiites, Iraqis killed by car bombs and people shot in the front of the head.

Here's what I'm afraid will happen: Democrats will look at Gen. Petraeus's uniform 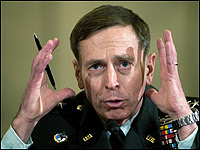 and medals and fall into their usual cringe. They won't ask hard questions out of fear that someone might accuse them of attacking the military. After the testimony, they'll desperately try to get Republicans to agree to a resolution that politely asks President Bush to maybe, possibly, withdraw some troops, if he feels like it.

There are five things I hope Democrats in Congress will remember.

First, no independent assessment has concluded that violence in Iraq is down. On the contrary, estimates based on morgue, hospital and police records suggest that the daily number of civilian deaths is almost twice its average pace from last year. And a recent assessment by the nonpartisan Government Accountability Office found no decline in the average number of daily attacks.

So how can the military be claiming otherwise? Apparently, the Pentagon has a double super secret formula that it uses to distinguish sectarian killings (bad) from other deaths (not important); according to press reports, all deaths from car bombs are excluded, and one intelligence analyst told The Washington Post that "if a bullet went through the back of the head, it's sectarian. If it went through the front, it's criminal." So the number of dead is down, as long as you only count certain kinds of dead people.

In light of all this, you have to wonder what Democrats, who according to The New York Times are considering a compromise that sets a "goal" for withdrawal rather than a timetable, are thinking. All such a compromise would accomplish would be to give Republicans who like to sound moderate -- but who always vote with the Bush administration when it matters -- political cover.

And six or seven months from now it will be the same thing all over again. Mr. Bush will stage another photo op at Camp Cupcake, the Marine nickname for the giant air base he never left .on his recent visit to Iraq. The administration will move the goal posts again, and the military will come up with new ways to cook the books and claim success.

One thing is for sure: like 2004, 2008 will be a "khaki election" in which Republicans insist that a vote for the Democrats is a vote against the troops. The only question is whether they can also, once again, claim that the Democrats are flip-floppers who can't make up their minds.

The other four points Krugman makes are here.

My bet is the Dems will fold - as usual - and bushco will continue the clusterf_ck in Iraq until they can hand it off to another administration to "lose".

The odds are in my favour.

(Cross-posted from Moving to Vancouver)

Posted by West End Bob at 15:28 Recommend this Post