Well, actually, it's about the Duffy Trial

You may have been as confused as I was.

Why, given Harper's known inability to take orders or suffer any form of supervision, would he opt to remain a sitting Member of Parliament, now relegated to the opposition benches.

This is a guy, who during his concession speech, (which was a hastily re-written victory speech), didn't have the conventional decency to state his intentions to his audience before he scampered off the stage. His intention to resign as leader of the Conservative Party came via a statement released by the party president, John Walsh and even it was a rather muddled sounding bit of poli-speak with all the clarity of a cold latte. Conservative MPs have no idea if Harper is their leader.

What did come out was that Harper would continue to sit as an MP. And one doesn't have to dig too deeply to understand why.

As long as Harper is a Member of Parliament he cannot be compelled to testify as a witness in any civil, criminal or military proceeding. You can bet he'll be hanging onto that seat until the Duffy trial is concluded.

Power in a state visit

The Chinese president goes on a state visit to the UK, and quite literally brings the Chinese state with him.

...the Chinese embassy filled the Mall with thousands of supporters kitted out with T-shirts and flags, drowning out human rights protesters in a sea of red.


In his 11-minute speech, Xi acknowledged that he was addressing the “mother of parliaments”, dating back to the 13th century, but added: “In China, the concept of putting people first and following the rule of law emerged in ancient times.” He noted that one Chinese legal charter went back 2,000 years.

I imagine Cameron and the rest of his gang of public school boys running the government now are wincing and fuming at the humiliation. Perhaps not as much as the Chinese were humiliated by British (and other) imperial interferences in earlier times, likewise driven by Cameron and Osborne's ancestral class interests.

Xi knows this, and I imagine the show of Chinese power is a symbolic demonstration of the reversal of circumstances. The Chinese state can colonise the UK economy and put thousands of its citizens on UK streets, while the most the UK can do is provide the Chinese leader with a fancy dinner and a guided tour.

Well, the ex-Harper-cons succeeded in pissing off enough Canadians to actually find a polling station and vote them out in record numbers. More than 68% voter turn-out. Well over 70% in some ridings and regions.  Even with the Fair Elections Act, the cheating and the lying, all their fascist jackboot bullshit, bought newsmedia editorials, the rest of it, they still failed in catastrophic form. Wow.

It's interesting to think that an entire generation of the civil service (including no doubt a number of now ex-PMO staffers) have entered adulthood and parliamentarians, the Commons knowing only Harper and his brand of governing. Even Rosemary Barton has mentioned she's only covered federal politics under a hostile Harper government. How government finds its way from here will be interesting to watch.

Will they keep the Harper changes, fall-back on institutional memory, or evolve into something else?
Posted by Boris at 05:37 Recommend this Post 8 comments

1. Ding dong the witch is gone.

2. The immediate legacy of Harper, sworn enemy of all things Liberal (esp. Trudeaus), is to facilitate a majority Liberal government led by the Son of the Father. Ouch. That's Shakespearian political drama Canadian-style if there ever was.

3. The same problem that allowed Harper his 2011 majority also allowed Trudeau's win. FPTP permitted both parties to win majorities with a minority of the popular vote. Not-Harpercons still does not make the Grit-victory fair. We need to get on that.

4. Let's see how they do. I'm afraid the confused and disillusioned shortpantsers will have trashed vacated Tory offices and that incoming Liberal ministers will discover other more sophisticated messes that require clean-up before they get started. I hope I'm wrong.

5. When they do get started, it'll be interesting to find out just what were truth, lies, and unmentionables in campaign, and how these translate into policy and legislation.

6. Future elections could be even more interesting. The NDP is now a major federal player and has demonstrated it can appeal to enough Canadians to come within winning distance. The Tories, although Oppositon, have been relegated to, well, mostly Alberta and no-doubt have some post-Harper reinvention to do. What foul beast emerges from that vile and demonic process, we can't yet say.

7. Ding dong the witch is gone. [with apologies to witches]

I have no idea to what Canada will awake on Tuesday morning. The polls are too close to call and if recent events are any indication, maybe useless in predicting outcomes (someone needs to revise their sampling models!).

Right now my only concern is dislodging Harper. I don't much care what the other parties are promising because election campaigns are silly things built of spin, lies, and blue blue sky. The only thing that counts is what they do after vote day. I mean, I'd be quite happy if they were lying about refusing to form a coalition in order to offset shrieks of "coup d'etat" from the fascists and perhaps an attempt to bully our spongy GG into somehow halting the electoral process or discounting anything other than a Tory victory.

Still, should Harper form the next government, especially a majority, so be it. There is no cosmic law that says his foetid government will have moral legitimacy, even in the freak event that it is awarded a fraud-less victory. The social contract will be broken, absolving the public of any moral obligation to conform to the wishes of the Conservatives.

It would open up a vast space for provincial, local, and grassroots social and political innovation and transformation.  The federal government is a lot less necessary in practical terms than it believes.

Provinces have enough constitutional power to run themselves, and there are millions of Canadians with great ideas and skills who can put their energy into building the kind of country we want.  But we might have to work for it.

"Election Day in Canada: The Rise of Voter Suppression"

Defence Watch is reporting that coalition air strikes have killed 20 000 ISIS members, which means an unknown but likely high number of wounded. I don't think IS battlefield medicine is of a NATO standard, meaning that many of the killed would likely have survived in other circumstances. Still, 20 000 is a lot. To put in perspective, it's nearly half of the more than 50 000 US troops killed in the Vietnam/American War.

Yet IS remains, far less resourced than the Russians, US, and their allies. Still it is able to hold ground and sustain itself while the bombs fall, and the Russians and Americans squabble over strategy and air space and menace each other.

I suppose it's possible that the mix of efforts targeting IS (and related groups), however organisationally dysfunctional, will break its back in terms of its logistics and personnel, but I'm not sure that leaves anyone particularly better off. Afghanistan and Bushed Iraq both show that motivated armed groups are able to dissolve and wage a very persistent guerrilla war against any occupying force and any returning residents. The region will be very unsafe for the foreseeable future, perhaps indefinitely, regardless of whether IS remains intact and able to hold territory. The Assad regime or whatever replaces it will be busy for years to come, at least until climate driven drought destroys the water supply and food security of the region and the regime collapses into more violence. Displaced militants, especially those with foreign passports will flee and head to Saudi Arabia, Europe and elsewhere, creating more headaches for the security services in those places. Gulf states especially may be prone severe upset due to the large numbers of IS sympathisers in those places.

Any force that can sustain 20K dead and still hold ground isn't going to fold easily under more bombs. Maybe a solution rests less in dropping bombs, than in drying up the supply of food, fuel, arms and money that sustain IS and its mimics - basically ring-fencing Syria and Iraq, and making possible - where possible - the safe exit and relocation of refugees.  Nope, instead the US, Russia, Iran, et al will continue to shovel arms into the place and Europe will continue to shit itself over consequent refugee flows. If it continues long enough, Israel will get seriously involved and things will get even weirder.

In the post-9/11 era, none try to end wars. The powers that be used to do that, often through ham-fisted, bungling attempts, but the shooting stopped in the Balkans, Cyprus, Vietnam, and a host of other places.  Now instead they institutionalise multi-year bombing campaigns and low-intensity land-wars, which are just continuations of existing wars. War can now be waged below the public casuality tolerance threshold, making it easier to use military force as a normative policy tool against enemies that pose minimal material threat to Western forces.

I can tell you that if Russia or the US and its allies lost 20 000 troops to IS, they'd be using mach numbers to measure the pace of withdrawal. It continues because it's easy.

The G&M Will Again Endorse the Harperian Nightmare.

I can hardly bear the suspense.

It should be any day now that Phillip the Crawley yet again instructs his pet editorial board at The Grope and Flail to endorse the Harperian junta.

The torturous language required in order to do that is what has me in suspense. I'm sure the tame scribes will do a bang up job of it or face the consequences.

It should make for an enraging read. 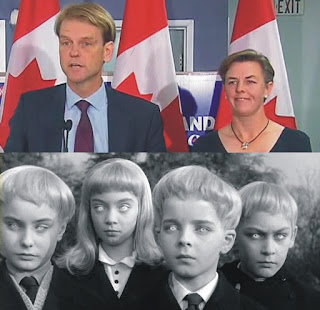 For some reason, Chris Alexander and Kellie Leitch remind me of the mutants in the Midwich Cuckoos . . .
Posted by Edstock at 14:46 Recommend this Post 8 comments