Back from lolling around at the lake all summer, 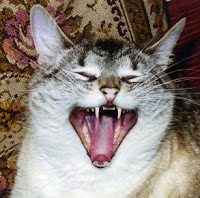 Ottawonk weighs in on
The Cons' Veiled Threats Against Elections Canada Non-Controversy with:
Lolparliamentarians and
A Dingo Ate Our Photo ID
....[obl rulz lol !!! :P]...
They also award their coveted second annual prize for Federal Public Service Excellence in the Field of Speaking Truth to Retardedness™ :

You're not bored with laughing at this four party lunacy yet, are you?
Because CBCTV National News was still going on about it last night.
Sadly however they lack the editorial adroitness of Canadian Cynic.
(Cross-posted at Creekside)
Posted by Alison at 09:28 Recommend this Post