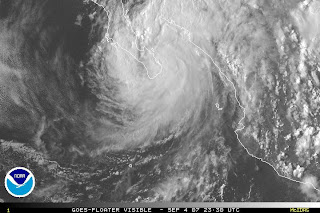 Hurricane Henriette made landfall on the southern tip of the Baja Peninsula at about 2030 GMT today (1:30 pm PDT) as a Category 1 cyclone. Surface winds were estimated at 75 knots/86 mph/139 kmh. Actual landfall was just east of Cabo San Lucas near San Jose del Cabo.

Henriette is now a killer. Six people died in Acapulco when torrential rains flooded areas of that city and collapsed houses. One person was killed in Cabo San Lucas when, too close to the shore, the stor

m surge sucked her into the ocean.

The hurricane is expected to weaken as it moves up the Baja and emerges in the Sea of Cortez, however, it's movement to the east has changed forecasts. Henriette was expected to weaken significantly enough to prevent a resurgence in power over the Sea of Cortez. This, however, is no longer clear and the storm's organization will have to be closely monitored once the centre is back over water.

Two records have now been broken this hurricane season:

1. This is the first year on record that two Category 5 Atlantic hurricanes, Dean then Felix, have made landfall in the same year;

2. This is the first time on record that an Atlantic and a Pacific hurricane have made landfall on the same day. The National Hurricane Center said the last recorded incident that was as close to this event was in August 1992, Hurricane Andrew having hit Florida just 1 day after Hurricane Lester hit the Baja.

Not necessarily. Pointing at these events in concert might be convenient but it would also be irresponsible. There is a much greater picture that must be brought into play. These cyclones may produce convenient statistics and examples but they are not the story people may want to believe. If I have an opportunity, I will explain further later today or tomorrow.
Posted by Dave at 17:10 Recommend this Post