Invest 99L - Possible tropical depression off the US east coast 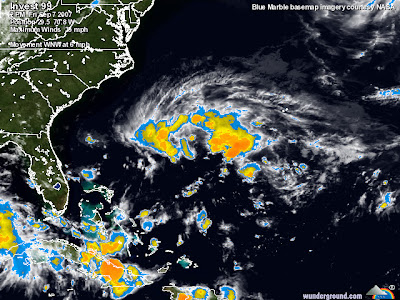 The National Hurricane Center has been watching a disturbance between Bermuda and the Southeast coast of the United States for some time now. Invest 99L has been very slow in developing but now the wind shear seems to have dropped and the NHC has issued an advisory.

If 99L grows as the wind shear drops it will become the Tropical Depression 7 of the season. 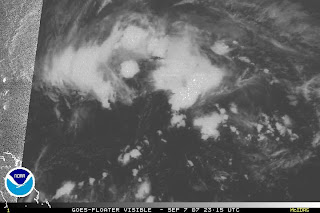 The NHC is advising that Tropical Storm Warnings could be issued as early as tonight. Hurricane hunter aircraft, on this afternoon's mission failed to find any circulation, but watching the satellite images, it looks like a centre is slowly starting to develop. It is currently moving West Northwest at 9 knots/10 mph/16 kph.

There is concern that if 99L energizes to a Tropical Revolving Storm that there is enough time to grow to a Category 1 hurricane. Even if it doesn't, as a tropical storm it will likely pack a lot of moisture.

The computer models show this system tracking away from the coast at the present time, but it has the potential to give the US and Canadian east coast a very wet bath.

UPDATE: This is now a Tropical Storm - Gabrielle. Information here.
Posted by Dave at 17:10 Recommend this Post