Clowns for all seasons 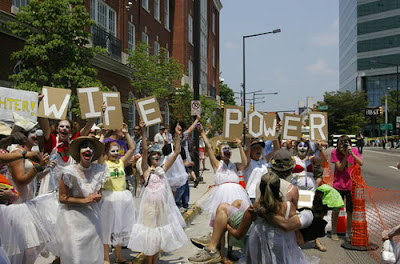 St. Thomas More, the man for all seasons, was entirely correct when he said "The devil, that proud spirit, cannot endure to be mocked"
Not bad for a bunch of clowns. I'm told in the comments that the link is not so reliable, so here's the whole thing from Neatorama:

Here’s an excellent example of pwnage: when the white supremacist group VNN Vanguard Nazi/KKK tried to host a hate rally in Knoxville, Tennessee, they were foiled by … clowns!

Unfortunately for [VNN] the 100th ARA (Anti Racist Action) clown block came and handed them their asses by making them appear like the asses they were.

Alex Linder the founder of VNN and the lead organizer of the rally kicked off events by rushing the clowns in a fit of rage, and was promptly arrested by 4 Knoxville police officers who dropped him to the ground when he resisted and dragged him off past the red shiny shoes of the clowns. http://www.volunteertv.com/home/headlines/7704982.html

“White Power!” the Nazi’s angrily shouted once more, “White flowers?” the clowns cheers and threw white flowers in the air and danced about merrily.

“White Power!” the Nazi’s tried once again in a doomed and somewhat funny attempt to clarify their message, “ohhhhhh!” the clowns yelled “Tight Shower!” and held a solar shower in the air and all tried to crowd under to get clean as per the Klan’s directions.

At this point several of the Nazi’s and Klan members began clutching their hearts as if they were about to have a heart attack. Their beady eyes bulged, and the veins in their tiny narrow foreheads beat in rage. One last time they screamed “White Power!”


A hat tip to Cowboys for Social Responsibility, second home of the Ponoka police blotter.
Posted by Unknown at 22:08 Recommend this Post

Email ThisBlogThis!Share to TwitterShare to FacebookShare to Pinterest
Labels: apoplectic bigots, teh funnee