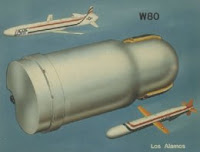 As Jill says, Who needs terrorists... ?

The USAF was simply moving a few old Advanced Cruise Missiles of to the decommissioning facility at Barksdale Air Force Base. They just made one little mistake before departing Minot, North Dakota: they forgot to remove the W80-1 nuclear warheads.

A B-52 bomber mistakenly loaded with at least five nuclear warheads flew from Minot Air Force Base, N.D, to Barksdale Air Force Base, La., on Aug. 30, resulting in an Air Force-wide investigation, according to three officers who asked not to be identified because they were not authorized to discuss the incident.

The B-52 was loaded with Advanced Cruise Missiles, part of a Defense Department effort to decommission 400 of the ACMs. But the nuclear warheads should have been removed at Minot before being transported to Barksdale, the officers said. The missiles were mounted onto the pylons of the bomber's wings.

Advanced Cruise Missiles carry a W80-1 warhead with a yield of 5 to 150 kilotons and are specifically designed for delivery by B-52 strategic bombers.

Air Force spokesman Lt. Col. Ed Thomas said the transfer was safely conducted and the weapons were in Air Force custody and control at all times. However, the mistake was not discovered until the B-52 landed at Barskdale, which left the warheads unaccounted for during the approximately 3-1/2 hour flight between the two bases, the officers said.

Ahem! Yes! Well, not knowing where they are is kind of loose control.

The AP also reported that the bomber was carrying six nuclear warheads, not five as sources told the Military Times.

Really? Are you sure? Maybe you should count them again. So, aside from the things being loaded on a BUFF with the "tits" attached, an oversight of gargantuan proportions, the actual number was also in question. That makes two massive errors.

At no time was there a risk for a nuclear detonation, even if the B-52 crashed on its way to Barksdale, said Steve Fetter, a former Defense Department official who worked on nuclear weapons policy in 1993-94. A crash could ignite the high explosives associated with the warhead, and possibly cause a leak of the plutonium, but the warheads' elaborate safeguards would prevent a nuclear detonation from occurring, he said.

That, is a serious piece of downplay, and I mean "serious". Given that it seems nobody actually knew the nukes were attached to the missiles one has to ask how anybody would know whether the appropriate safeguards were actually operating. Nukes travel in an isolated exclusion zone filled with strong links and weak links intended to provide failsafe protection against outside stresses like fire, increased pressure and the like. Before a nuke is transported all of those are thoroughly checked. But if no one knew the nukes were even there, is there a chance the exclusion zone checklist was not completed?

The likelihood of an accidental detonation is nearly impossible. The Permissive Action Link, an electronic arming code requiring a two-operator insertion of two different codes within a specified time with an automatic lockout, would have prevented the warheads from ever being armed, but it isn't explosion or detonation that presents the problem.

"The main risk would have been the way the Air Force responded to any problems with the flight because they would have handled it much differently if they would have known nuclear warheads were onboard," he said.

Because in the event of a catastrophe a plutonium leak is going to do more than make the corn South Dakota grow bigger, especially if the B-52 had fallen out of the sky, for any reason, over a densely populated area.

Air Combat Command will have a command-wide mission stand down Sept. 14 to review their procedures in response to this oversight, he said.

Ah yes. Heads will undoubtedly roll and we will hear no more of this.

Rock would not be amused.