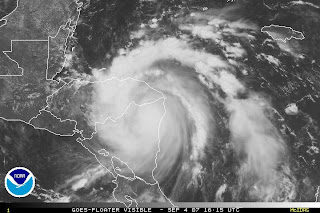 Hurricane Felix made landfall at around 12:00 GMT (8 am EDT, 5 am PDT), as a Category 5 cyclone on the northern border of Nicaragua/Honduras. It is presently inland and should be weakening.

Despite the intensity of Felix, it is a relatively small system and may not accumulate moisture from the Pacific. It's accelerated development and the speed of its advance across the Caribbean were factors in keeping it small albeit highly dangerous.

The problem now is the amount of moisture it will drop in the mountainous regions of Central America. There will be serious flooding and mudslides from torrential rainfall which could reach isolated totals of 25 inches in one onslaught, although generally the National Hurricane Center is calling for overall totals of somewhere in the 10 inch range. Again, this is due to Felix's size and the fact that all its moisture comes from its Atlantic accumulation of moisture. If it does manage to pick up Pacific moisture, rainfall will increase although, given the fact that the cyclone will decay rapidly in the mountains, that is not likely.

This year marks the first time in recorded history that two Category 5 storms (Felix and Dean) have made landfall in the Atlantic basin in the same year. Since reliable record keeping began in 1944, there have been 27 Category 5 hurricanes in the Atlantic. Eight of these have occurred in the past five years.

That is not to say that there haven't been prior eras where that type of extreme weather has not happened, but it is a valid observation on the statistical record. 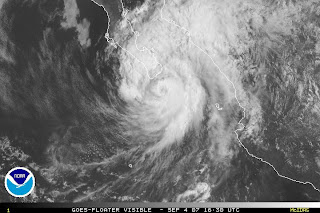 Henriette
Henriette has been upgraded to a hurricane and has enough time to increase to Category 2 before it makes landfall on the southern Baja Peninsula. It has increased its speed of advance somewhat to 9 knots/10 mph/17 kmh and has altered a little more towards the North.

Henriette is expected to weaken as it passes over the Baja and make a second landfall in northwestern Mexico. It will carry with it heavy rainfall which will be felt as far north as the southwestern US.

The track alteration also makes it look like Henriette will land smack-dab on Cabo San Lucas in the next few hours. Computer models tracks vary somewhat although they are clustered enough to suggest the extreme south of the Baja is the landfall point.
Posted by Dave at 10:30 Recommend this Post