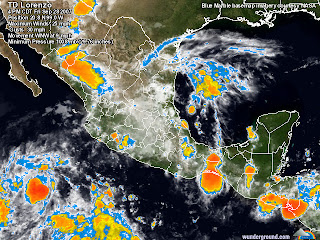 You probably didn't hear about Hurricane Lorenzo. It blew ashore on the Mexican coast earlier today packing 75 mph/120 kmh/65 knot winds and some intense localized rain. It was, by all standards a small, very local cyclone, but one must be careful here. A hurricane is a hurricane and the localized effects are devastating. The fact that Lorenzo developed quickly, rose in intensity in a very short time and then move ashore speaks to the conditions in the area.

Lorenzo went from Tropical Depression to Tropical Storm to Category 1 Hurricane in a matter of hours with pressure in the centre dropping as fast as 3 millibars per hour. As small as it was, it caused flooding in areas around Tuxpan and accompanying winds and rain as far south as Vera Cruz.

This is the fourth hurricane of the 2007 season to make landfall on a Mexican coast. 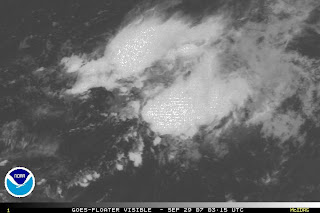 This little beast is Tropical Storm Karen. So far, it remains a tropical storm and, because of high wind shear, appears likely to remain disorganized.

All that said, the forecast confidence at the National Hurricane Center is very low and with a high pressure ridge building, this system has the distinct possibility of surviving and becoming a hurricane. Much depends on what happens around the storm. Right now, no one is able to make an accurate prediction. If it survives two possibilities exist: 1. With a ridge of high pressure to the north and some development Karen could move towards Florida or the Caribbean. 2. A series of troughs in the ridge could send Karen into landfall on the New England coast.

A small bit of oddness is that almost all the computer models are showing another system forming off the Carolinas. If this interacts with Karen, no one is sure what would happen. (There are some ideas, but why engage in "scare" meteorology?) This system deserves close watching.

And no... hurricane season is not over because the "Back to School" sales have ended.