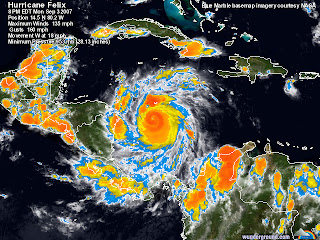 Hurricane Felix took a slight wobble to the south during its westward track toward Nicaragua and Honduras which probably caused a slight weakening. Sustained winds on Felix make it a Category 4 cyclone. In relative terms, that would be good news.

In other relative good news, the speed of advance and the lack of a Pacific flow over the Continental Divide will probably reduce the amount of rainfall expected over the mountains of Nicaragua and Honduras to 8 inches with occasional areas of 12 inches. That's considerably less than the 24 inches dumped by Hurricane Fifi in September 1974 which killed over 8000 people. There will, however, be a great risk of flash flooding and a storm surge in excess of 18 feet is expected.

Felix is now tracking due West at 18 knots/21 mph/33 kmh. Landfall is expected somewhere in the area of Cabo Gracias a Dios on the Honduras/Nicaragua border early Tuesday morning. Leading edges of the dangerous quadrants of the hurricane have already started to affect the Central American coast with heavy rainfall and storm force winds.

An added note: Belize, which took some damage from Hurricane Dean will likely feel a greater effect from Felix.

This loop will give you a good impression of Felix's size, speed, velocity of rotation and direction.
Posted by Dave at 18:05 Recommend this Post