Reading MoS, I'm struck not for the first time, that some senior members of the Air Staff here, I suppose Australia too, live in a fantasy world. If I were in charge (come on, we all have these moments), I'd retire or fire any military leader who couldn't see past the F-35.

They be fantasists willing to bet the nation's defence on something non-existent.

I'm less convinced than ever that Canada really and truly needs a combat-ready air force. Arctic sovereignty sure, but not if we manage to sign resource and access treaties with the other circumpolar nations.

Offensive capability for "large package coalition"operations over the developing world? No. Not at all core requirement, more of a political and ego luxury. If Libya had a seriously sophisticated air defence system, there'd be no RCAF there.

Terrorists and airliners? OK, but you don't need an air armada of 5th generation fighters to shoot down airliners.

Coastal? Maybe in the rare event that have a serious problem with someone elses Navy that we fighters on the coast.

NORAD compels us to maintain a credible air defence presence over the continent, but Canada isn't much a buffer from any serious adversary. In fact, this is the only practical reason for maintaining a fleet of fighters. And even that is contigent on some sort of threat on the horizon to mobilise them against... 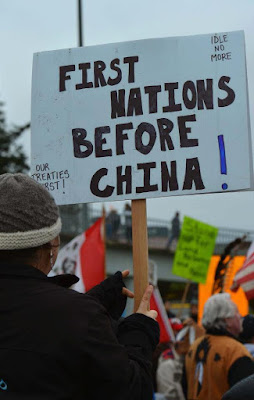 If you Facebook, very interesting pictures and information can be found on Blood-Kainai Tribe Politics & News.
Posted by Edstock at 16:55 Recommend this Post 0 comments

Pull your collective head out of the middle-ages and pay attention to what happens to homophobic bullies in this day and age.

Yeah, you might wanna rethink this, Ms. Coste and St. Thomas of Villanova Catholic School officials. The internets are coming for you.

PMO not happy, Wildrose and CBC dump him. The University of Calgary is at least showing signs of discomfort and I imagine there's a meeting or two taking place.


The conservative pundit and University of Calgary political science professor made the comments at a lecture about changes to the Indian Act in Lethbridge, Alta. on Wednesday night. They were recorded and posted online by someone in attendance.

"I certainly have no sympathy for child molesters, but I do have some grave doubts about putting people in jail because of their taste of pictures," said Flanagan in the video.


Seems, thankfully, as if there's a limit to conservatives' tolerance of their own intellectual and moral regression. Someone ought to ask Barry Cooper for comment, just because.

DEFENDING DEMOCRACY is merely a Parliamentary manoeuvre, according to Stevie. Odious.

Day 1. Scottish Roman Catholic Cardinal Keith O'Brien, slated to be a member of the conclave choosing the next pope says RC priests should be allowed to marry and have families. Because as he pedantically points out, celibate isn't actually something their anthropomorphic God told them to be and that weird passive-aggressive misogyny is actually all manmade and therefore completely fallible.

Day 2. Several priests and an ex-priest report the Cardinal to the Vatican for "inappropriate acts" and call for his resignation.

I'll offer some conspiracies, because seriously kids, how is there not one?

Conspiracy 1. The Vatican doesn't do a whole lot about paedophile priests because they prefer the blackmail power that gives them should they stray too far from the middle-ages.

Conspiracy 2. The creeps and freaks hiding from themselves in the priesthood stand to be exposed should some sort of normalcy intrude on their special Club of Rome and they'll crush any attempt to change the status quo.
Posted by Boris at 19:19 Recommend this Post 1 comments

There be foul odours over English Bay, blown in from East and West.

I've been having a hard time lately justifying why we still need politicians, because they really aren't making the case for themselves these days.
Posted by Boris at 12:05 Recommend this Post 7 comments

THE MARCH ON STEVIE continues, the Journey of the Nishiyuu, as the concerned aboriginals progress through Waskaganish yesterday on their way to consult with Stevie and the GG. Be sure to join 'em.
Posted by Edstock at 15:59 Recommend this Post 2 comments

Email ThisBlogThis!Share to TwitterShare to FacebookShare to Pinterest
Labels: Harper fail, The Journey of the Nishiyuu

The reason that no amount of marketing and focus groups will sell the Tar Sands to us is because we do not want an "energy sector" that involves them.

There's no magic pill here.
Posted by Boris at 18:41 Recommend this Post 1 comments

One would think that a prerequisite for pontificating on same-sex marriage would be the ability to distinguish between same-sex and opposite-sex unions. The apparently uber-straight titans of heterosexuality at Fox News?

VENEZUELA DONATES free heating oil to 100,000 needy US households. According to Brett Wilkins post in the DIGITAL JOURNAL.

For the eighth straight year, Venezuela's state oil company is donating free heating oil to hundreds of thousands of needy Americans.
Posted by Edstock at 19:24 Recommend this Post 3 comments

Email ThisBlogThis!Share to TwitterShare to FacebookShare to Pinterest
Labels: US poor, Venezuela

In an effort to promote a more robust Canadian identity, the Conservatives have produced an incentive and merit based three-tiered Canadian citizenship.

First Class
The top class of Canadian citizen applies to biological male persons who:
- Second generation or greater Canadians who are 1) non-Muslim and of Western European ancestry, 2) native English or French speakers
- Members of the Conservative Party of Canada
- First generation Canadians or Canadians of non-Western European ancestry who are fluent English or French speakers, have served in the police or armed forces, or otherwise satisfied the Minister for Citizenship and Immigration of their loyalty to Canada
- Must not hold dual-citizenship if second citizenship is not UK, Australia, New Zealand, or US

Passports and identity cards are to be issued marking the class of citizenship of the bearer. Persons who have had their citizenship revoked by a minister are ineligible to take wage employment, return to Canada upon leaving, enroll in education, or otherwise receive public services. While dual citizens may benefit from returning to their country of alternate citizenship former Canadian-only citizens effectively become stateless and are permitted to appeal to the United Nations or other external organizations for aid.
Posted by Boris at 16:12 Recommend this Post 2 comments

Senator Patrick Brazeau has been removed from the Conservative Party's caucus, while sources tell CBC News that he is in a police jail in Gatineau, Que., following an alleged domestic dispute.

If he's in jail for a domestic dispute, I hope she or he isn't hurt.

I don't know, maybe being such an apt personfication of all that is HarperCon made them a little too uncomfortable.

Or maybe his number was up as soon as he committed the Conservative arch-sin of losing to a Trudeau.

Email ThisBlogThis!Share to TwitterShare to FacebookShare to Pinterest
Labels: Brazeau

I don't think Harper had any idea just who he as appointing when he named Kevin Page as Parliamentary Budget Officer.

The man cannot be intimidated and will crawl through mud and fire to do his job and then some.