Tropical Storm Gabrielle - Landfall and a turn to seaward 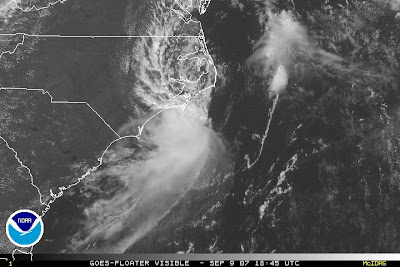 The centre of Tropical Storm Gabrielle made landfall at about noon EDT, although the worst effects should just be starting to be felt now. Winds in the neighbourhood of 45 knots/52 mph/83 kmh, or higher, can be expected as the southwest quadrant passes over the coast. Landfall occured over the North Carolina coast along the Cape Lookout National Seashore. The NWS radar at Morehead City provides a nice close look at this system. 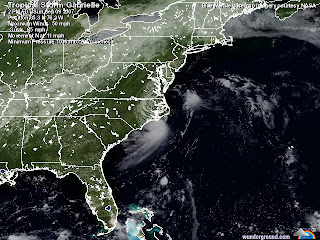 From the radar picture it looks like Gabrielle has made the predicted swing to the Northwest and it should start heading back out to sea. That's good news for the North Carolina coast, which is experiencing heavy rains and high winds in some areas, but exceptionally bad news for coastal shipping traffic and fishing fleets on the continental shelf. As this storm moves to the Northwest it's energy will increase and, although relatively small, it is forecast to move through very busy shipping lanes and fishing grounds.

Added to the problems for ships at sea is a relatively large mid-latitude depression in the mid-Atlantic about 600 miles southeast of Newfoundland and west of the Azores. Weather routing around that system now puts ships in the path of Gabrielle as it makes its way to sea and a transition to an extratropical depression.

Gabrielle will probably be absorbed by that large Atlantic depression and while the effects on land won't mean much, from a maritime point of view it will be worth keeping a close eye on how

That mid-Atlantic depression is going to have an effect on another system which is attracting attention. I'll discuss that in a separate post.
Posted by Dave at 13:11 Recommend this Post