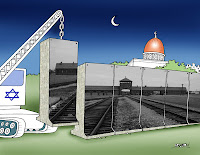 It was the winner of the International Holocaust Cartoon Competition.
The contest was sponsored by the Iranian newspaper Hamshahri in response to the publication of the 12 cartoons mocking/denigrating Mohammed in a Danish newspaper in Sept 2005.

Statement of the artist, Abdellah Derkaoui :
"I want to express my total heartfelt sympathy with the millions of Jewish victims of the Holocaust who suffered the greatest crime against humanity under the Nazis. Nobody can deny that more than six million people were massacred during the second world war by the devil Hitler and his Nazi henchmen." Continued here.

At the time, many westerners were surprised that the winning entry was so sympathetic both to Jews and to the Holocaust. They are about to be surprised again.

"Zero Degree Turn" is the Iranian Shindler's List, a government-made miniseries airing on the Iranian state-run television. Based on a true story of diplomats in the Iranian Embassy in Paris in the 1940s who gave out about 500 Iranian passports to Jews to help them escape, it is a fictionalized account of an Iranian diplomat who decides to forge Iranian passports for French Jews.
SF Gate is enthusiastic about the series, despite repeating the now-debunked canard about Ahmadinejad and "wiping Israel off the map".

Reading about it, I was reminded that Iran was the only Middle East country on this list to hold spontaneous candlelight vigils for victims of the 9/11 World Trade Center attacks this year.
I wonder how many of them watch President Ahmadinejad on TV and think, "I sure hope the rest of the world isn't basing its opinion of the whole country on what this idiot says."
Just like us.

Cross-posted at Creekside
Posted by Alison at 14:34 Recommend this Post