Global warming, hurricanes and the elephant outside the room 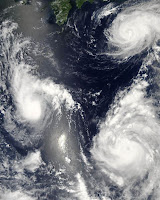 Yes, in the last little while you've seen a lot of posts providing a lot of information on hurricanes and typhoons. (In the Northwestern Pacific a tropical cyclone is a typhoon. On the eastern side of the International Dateline it is a hurricane. Both use the Beaufort and Saffir-Simpson scale.)

Some readers have been questioning why TGB suddenly started posting severe weather information.

The immediate answer is that observing, analyzing and forecasting severe weather events at sea is a part of my profession. Additionally, I am an oceanographer. This stuff interests me beyond the occupational necessity of being able to forecast far enough in advance to avoid the worst effects of severe weather. I have an intense interest in the effects of severe weather, particularly at sea, and have enough professional knowledge to assemble an accurate briefing.

The quick and simple truth is, there was a demand for regular information as tropical depressions became tropical storms and formed into hurricanes or typhoons. I had called Dean back when it was a new tropical depression in an early post. The reason I did it was because I noticed that if it became a major TRS, the increased water temperature in the Southern Caribbean would give the thing enough fuel to become a monster. I was asked if I could post more information as it became available. But further, I was watching commercial television stations and network news reports engage in wild speculation about the where, when and probability of a hurricane striking their area. Some were pure B.S. Some were fomenting fear. Some were dead on accurate.

So, because I was watching and forecasting anyway, it was a simple matter of gathering up what I was using as source and putting together a plain English information post with pictures.

A commenter, here and elsewhere, insinuated that I was beating some type of "global warming activist" drum by putting the summer hurricane season out front. That, of course, is utter garbage and you're about to find out why as I continue.

There are two camps out there and it is already known which one I hang with. So this next little bit is going to shock one group. In the name of fair play, I will attempt to equally irritate the other camp.

The strength and direction of hurricanes Dean and Felix are being held out, by those who accept global warming as fact, as clear evidence to support the existence of global warming. The emergence of Henriette in the Eastern Pacific and its calendar proximity to events in the Atlantic is being used to strengthen the assertion that global warming is happening and these cyclones are proof.

That simply is not the case.

The fact that this is the first time on record that two major Category 5 hurricanes made landfall in a span of two weeks tells us little. It is, in fact, far too early to make any kind of assumption. Since 1851 there have been four events which saw more than one tropical revolving storm evolve into Category 5 cyclones in the same year. As far as we know. We have no idea, beyond anecdotal information and ships' logs, whether this has happened before.

Both Dean and Felix were forced on their respective tracks by a high pressure area over Florida and the Gulf of Mexico. The tracks of the storms, which were well predicted by computer models and the National Hurricane Center, were influenced by that persistent high pressure area and the storms themselves were forced into an area of known high sea surface temperatures. These hurricanes became Cat 5 monsters because of the area into which they were pushed. Had they taken another track and had the high pressure area been further north, those storms could have easily never reached the strength they did, or they could have weakened before making landfall in entirely different locations.

Henriette has probably gotten the bum rap in this case. That particular cyclone was nothing out of the ordinary. What made it so significant was its track over a well-known resort area and onto the coast of Mexico then dissipating as it dumped heavy rains in the southwestern US. The truth is, as far as hurricanes go, Henriette was weak through the course of its life.

What could be held out as evidence of global warming is if a hurricane formed and then went to Cat 4 or 5 where it wouldn't have before been possible. That would be direct evidence of significantly increased sea surface temperatures providing the fuel to generate a more powerful cyclone where before it wouldn't previously have been likely.

With only two Atlantic hurricanes to use as a measure, Dr. Terry Joyce of Woods Hole Oceanographic Institute states it as clearly as it needs to be, "[T]o attribute both of these to global warming, after only two Category 5 storms, is ... premature."

In short, it would take more than two storms to get heads turning. There is a pattern developing and the theoretical wind velocity is increasing, but the record needs to be longer. This year, (to date), may eventually become a part of the case for global warming, but to take one hurricane season in isolation as evidence is irresponsible and not scientifically accurate.

I said I would give the global warming skeptics/deniers something to cause them some acid reflux.

You cannot take any single year of hurricane activity either and use it as evidence that global warming is not occurring. Yet, that is exactly what the occupants of that bandwagon did last year. Over the course of the last decade there is evidence that hurricanes are getting stronger. And the sea surface temperature increases over several centuries is not an assumption. The increased carbon loading of the ocean is not an assumption. Those facts are in evidence and are verifiable. In order to suggest that there is no evidence in the hurricane record of global warming there would need to be statistical evidence of overall stability where occasional anomalies are discarded. You don't have that.

So, while I, and several much more qualified scientists, are stating that we cannot use this hurricane season (so far) as evidence of global warming, the skeptics/deniers are in no position to support their assertions either.