The Decider, Commander-Guy. Out there... 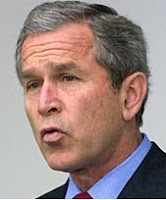 On a cold, frail limb, all by his lonesome self.

His first team has disintegrated. The end was in sight, so they left... to be with their families, to pursue opportunities in the private sector, to write speeches about things other than the "Axis of Evil".

They left him there without the overwhelming machinery of support needed to make a moron look competent. From Cernig yesterday:

George Bush gave a rare insight into his struggle with pronunciation yesterday when the White House mistakenly released an unedited script of his speech to the UN General Assembly.

The President, famous for mangling the pronunciation of “nuclear”, coining words such as “misunderestimate” and once forgetting the name of President Musharraf of Pakistan, gets a phonetic guide to key foreign names, the text reveals.

Mr Bush is coached not only on far-flung foreign places such as “KEYR-geez-stan” but also the name of his new French ally, President “sar-KO-zee”. He received no aid with the pronunciation of the Burmese opposition leader, and duly stumbled when he tried to pronounce “Aung San Suu Kyi”.

David Frum, a former Bush speechwriter, told The Times that all presidential speeches contained phonetic guides, but passing the unedited version to the press was an “oversight”.

Other pronunciation guides in Bush's speech (on which, more shortly) were Mugabe (moo-GAH-bee), Harare (hah-RAR-ray) and Mauritania (moor-EH-tain-ee-a). Fer Chrissakes - he's met Sarkozy! People keep saying Bush isn't a total moron - which can only indicate a lazy arrogance in not bothering to learn or remember how to pronounce a major Western ally's name properly.

And then today, the president who would be king, the man who some prominent conservatives believed was a genius, caused elementary school teachers to cringe as he mangled, once again, the simplest forms of his mother-tongue.

During his first presidential campaign, Bush -- who promised to be the "education president" -- once asked: "Is our children learning?"

On Wednesday, Bush seemed to answer his own question with the same kind of grammatical twist.

"As yesterday's positive report card shows, childrens do learn when standards are high and results are measured," he said.

Of course, if you get the official transcript from the White House, they've cleaned it up.

The White House opted to clean up Bush's diction in the official transcript.

Ahh... it makes one pine for the good old days when Bush wore a wire and was receiving instructions on what to say and how to say it. "Read the teleprompter s.l.o.w.l.y, Mr. President. Very, very slowly." The old staff surrounding Bush would never have allowed phonetic transcripts to leak and would never have let Bush use a multi-syllable word like "children" in public.

It's what happens when all that's left is the second team. With no one sending the plays into the huddle and having lost all the stars in the line, the quarterback can't even call an audible.

The next 14 months should be unbelievably entertaining.
Posted by Dave at 15:55 Recommend this Post

Email ThisBlogThis!Share to TwitterShare to FacebookShare to Pinterest
Labels: bush