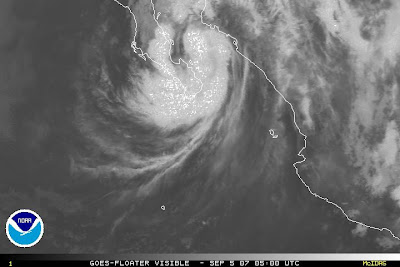 This wasn't completely unexpected but, probably because Henriette continued east as it made landfall over the Baja, it emerged into the Sea of Cortez, near Isla Cerralvo, with a ragged eye but still at hurricane strength. The course Henriette took raised questions as to whether the cyclone would have enough time over land to lose some of its integrity. So, the bad news is that this system is still a hurricane, did not weaken as much as expected and has time to intensify before it makes a second landfall on the mainland of northwest Mexico.

The actual landfall position is now a major question. Regardless of where the computer models suggest landfall will occur, the acutely oblique angle of approach to the Mexican mainland means that slight deviations from the forecast track could place Henriette at any number of landfall locations.

Adding to the equation is the fact that the Sea of Cortez is extremely warm and the wind shear is low. Both of those conditions will feed Henriette and increase its power. The worst case s

cenario at this point is if the cyclone moves left of the forecast track. That would give it increased time over the Sea of Cortez and a greater opportunity to gain additional strength.

There is little doubt now that mainland Mexico will take a hit from a second hurricane in as many weeks and the southwestern United States will feel the effects of Henriette in the form of heavy rains.