Squirming in the F-35's expensive seat 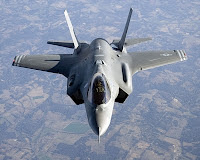 I you'll recall, anyone who questioned the Harperite rock-solid, give-no-ground commitment to purchase 65 F-35 Lightning II fighters, was labeled an unpatriotic, troop-hating, surrender monkey. That's because the Harperites aren't, and they only buy the best for our boys and girls in light blue.

Until the price goes up. (Emphasis mine)


"We have not as yet discounted, the possibility, of course, of backing out of any of the program," Fantino, associate minister of national defence, told the House defence committee Tuesday.

"None of the partners have. We are not. And we’ll just have to think it through further as time goes on, but we are confident that we will not leave Canada or our men and women in uniform in a lurch, but it’s hypothetical to go any further right now."

Fantino also said the government won't decide on the purchase until it knows how much it will cost.

Hey! The music's stopped. Someone's not going to get a chair!

As countries all over the world balk at the skyrocketing cost of the F-35 it took this long for the Rideau Canal tree-house club to figure out that buying the world's most expensive flying weapons platform might just not be a bright idea.

Pass the Oreos and let's see how we get down from here now that someone stole the rope ladder.


"We will be expending the allotted amount, $9 billion, for the acquisition if we are going to go there," he said.


"One of the things that I know for certain is that Canada remains involved in the joint strike fighter program," Fantino said.

"The decision, the determinate decision, has not as yet been made as to whether or not we are going to actually purchase, buy, acquire, the F-35."

Hey! Just hold it there a minute. The participation in the project was committed to by a previous Liberal government (which you all tried to use a defence of your position) and you kept telling everyone that it was tied to a commitment to purchase. So did Lockheed Martin.

This is starting to look like the big-talk days of Brian Mulroney. You might remember, he produced a Defence White Paper full of grandiose ideas and a plan to totally re-equip the armed forces. Almost none of it happened.

But his biggest idea, the one on which he refused to back down, the one which he said was only going to cost a whopping $10 billion, started its death spiral in much the same way, with similar statements to those of Fantino on the F-35.

Actually some small "c" conservatives have been most unhappy with the way the gov't has handled the acquisition:

Too bad about that second link, Mark.

Some people carry no cargo around here. Paul's one of them.

"In 2001, Lockheed Martin beat its rival Boeing to win the contract for 2,443 fighter aircraft for the U.S. Department of Defense. The Harper government says it relied on that U.S. bidding process to justify its decision not to consider any other fighter craft for Canada. “We do not need another costly bidding process,” says Associate Defence Minister Julian Fantino."

While you may not like Cjunk generally that's no reason not to read him on the F-35; after all he's being honest about the gov't.

Actually, Mark. It is a reason not to read him.

Now do the right thing and don't reply.