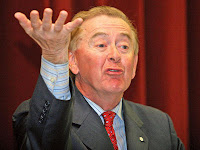 From the Right-Wing conference on self-stimulation, Preston Manning repeated most of the Harper talking-points on the electoral-fraud scam.


He said the most important issue is to determine how to end unethical vote-suppression tactics, be it by robocalls or any other form. Manning says stricter surveillance by Elections Canada and campaign managers is one option but ethical training of campaign workers is probably more effective.

Manning said it would also be wrong to point the finger solely at the Conservative party, even though the Elections Canada investigation is largely centered on the Tory campaign in Guelph, Ont.

“Fingers are always pointing at everybody. I think the bigger worry is that these technologies are available to all political people and you will have rogues in your organizations that might employ those technologies,” he said.

“I think it should be a concern to everybody and you can find illustrations of people who play close to the edge in every political party.”

Gee, ya think?! I don't get a warm fuzzy feeling at the sea of Conservative ethics mentioned here.

Perhaps we'll just have to watch to see who wins this year's Manning Centre Pyramid Award for Political Technology. The last three have been just dripping with ethics.

Another past Pyramid Award winner is Michael Davis, founder of Responsive Marketing Group for his campaign strategy work including Voter ID and GOTV.