This is what's happening.


The ongoing March heat wave in the Midwest will continue to set all-time heat records through Thursday, gradually shifting its peak intensity eastwards during the week.


Record-breaking heat has also penetrated into the Prairie provinces of Canada over the past week. Winnipeg, Manitoba has broken its record high for the past five days in a row, and hit 24°C (75.2°F) yesterday, its hottest March temperature on record. Forecast high temperatures for Wednesday and Thursday across Ontario are near 26°C, which will threaten the records for hottest March day in history for Windsor, London, Hamilton, and Toronto.


The unusual warmth is due to a loop in the jet stream that has created a large upper-level ridge of high pressure that is stuck in place over the Eastern U.S.--a phenomenon known as a "blocking pattern." Since the jet stream acts as the boundary between cold air to the north and warm air to the south, and the large loop in the jet places its axis far to the north of the eastern U.S., summer-like warmth has developed over the eastern half of the U.S. Conversely, colder than average temperatures have developed over the western third of the U.S. behind the southwards-dipping loop of the jet stream. This jet stream pattern is too extreme to be stable, and the big loop over the Western U.S. will break off and form a giant eddy on Wednesday. The resulting area of low pressure will be known as a "cut-off low", because it will be cut off from the jet stream. The cut-off low will drift slowly eastwards during the week, gradually bringing an end to "Summer in March" over the Eastern half of the U.S.

What caused the unusual loop and temperatures higher than have ever been recorded?

Surface heating and displacement. For some reason the cold air which usually resides over the pole was shoved southward.

That was caused, in simplistic terms, by the Arctic Oscillation being in a positive phase. (Lower than average pressure at the pole and higher than average temperatures across the landmasses to the south). Then it went negative. Europe got smacked with some significant cooling. But North America ended up with one of the wackiest Jet Stream configurations ever seen and that very odd and very dangerous loop.

There will be "water events". Big ones.

Please do not connect this with the effects of accelerated global warming. That might make you uncomfortable. It's best if you ignore it and believe that wearing shorts in Winnipeg in March is a great idea.

Oh yeah. Move to high ground. You can't hear Rex if your antenna is under water. 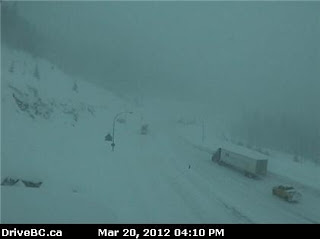 A massive snowfall along the Coquihalla Highway has prompted a travel advisory for the route between Hope and Merritt today and could help set the record for the deepest snow pack measured at the route's summit since its completion in 1987.
Travel along the route today is not recommended, said Dennis Kurylowich, operations manager for the Thompson Nicola District, Ministry of Transportation and Infrastructure.
Since 2 a.m., "we've had about 30 cm of snow," he said at around noon. As much as 50 cm could fall on the Coquihalla by the end of today, he added, stressing that people should "only travel if necessary."
The all-time snowpack record came in 1999 when 346 cm of snow was recorded at the summit.
As of two weeks ago, the summit's snowpack was 324 cm, he said.

Now, most of the readers here are smart enough to know that a snowfall, especially a heavy one, is a water event. And the event on the Coquihalla is a result of warmer, not colder, temperatures.

Heavy snowfall has been coupled with temperatures of about one or two degrees Celsius warmer across the region, he said.

You can't hear Rex if your antenna is under water.

I saw what you did there :)

This unusual warmth has only one cause: all the hot air emanating from this year's Republican primaries :-)