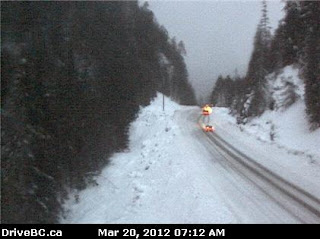 Winter, that is. The Vernal Equinox has occurred.

At 0514Z, (Universal Time for those so inclined. Greenwich Mean Time for those who like to play with the Time Equation), the sun crossed the celestial equator. If you were on the west coast, it happened yesterday at 2214T (10:14 PM, if you must).

Not really. It's a leap year. In the next successive three years the equinox will occur on 20 March with roughly six hours added in each year.

Today, depending on where you are, you can note that the day is slightly longer than the night. You can track the sun rising due east and setting due west.

Boring? You bet. Aside from the prospect of removing winter tires, (unless you live in Port Alberni on Vancouver Island and have to travel Sutton Pass in the image above), it's pretty much the same as yesterday except that it's about 3 minutes and 35 seconds longer daylight. It's also the Persian New Year. (Shame on you for not knowing that!)

We take it all for granted. Which is pretty cool when you consider that if I had written the above in the early 17th Century and you had read it and agreed with any of it, we would have been hauled in front of the Inquisition of the Roman Catholic Church on charges that the idea that the Sun is stationary and the Earth moves around it as foolish. Worse, we would be condemned as heretics and, (if not tortured and killed), tossed in prison. Ideology trumped science ... then.

It took the better part of almost 400 years for the Roman Catholic Church to crawl down off its high-horse and admit that Galileo was right all along.

Great to wake up to a Galileo reference. Can't happen often enough for me. Thanks, Dave.

All truths are easy to understand once they are discovered; the point is to discover them.