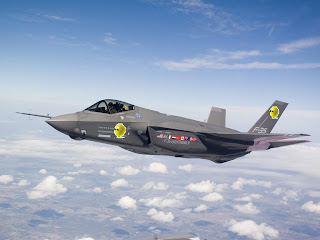 The F-35 Lightning II, is getting another drag across the coals of oversight.


When the F-35 Joint Strike Fighter (JSF) program went into development in 2001, it was already one of the most expensive defense acquisition projects in history at $223 billion. But in just over a decade, the price has ballooned to just under $400 billion -- and jumped nearly $15 billion just between 2010 and 2011, according to the GAO report published Tuesday. Also, the jets won't be in full production mode until 2018, rather than 2012 as originally planned, the report says.

The report notes the planes' mixed record on meeting its testing goals last year and cites a few specific problems, including difficulties managing the electronic system's unprecedented 24 million lines of computer code and delays in the development of critical mission systems that are so behind schedule as to be "risky."
...

The problem, according to Kendall and the new GAO report, was the Air Force's strategy of concurrency -- meaning that rather than testing a few models and then mass producing the planes, the jets would go into full production early and test as they go. Any faults in the design discovered during testing, therefore, would mean that all the planes -- those in production and those already completed -- would have to be retrofitted with the fixes.

Kendall said in February that the early production decision was due to "optimistic predictions" based on design tools, simulations and modeling. But he said the design tools weren't perfect, the models weren't precise enough and now the military has found problems in all three variants of the F-35.

And then there is this:

“The contract we signed shelters us from any increase in those kinds of costs, so we’re very confident of our cost estimates.”

Stephen Harper
8 April 2011
Right, except that no one has yet signed a contract laying out actual costs. Harper lied.

With the GAO predicting unit costs up to $162-million, more than double the $75-million figure until recently parroted by Harper, the F-35 is effectively dead. The Japanese have already drawn their line in the sand on costs and they'll probably start a domino effect of cancelled foreign orders. If the Japanese eject I expect the Koreans and Australians would quickly follow probably with the Italians and Dutch close behind.

I doubt even mighty Lockheed can pull this one out of the fire. They couldn't save the F-22 and that airplane worked.

Harper Lied? But, but, he's a Christian Soldier, ain't he?