Does voter suppression change the result?

Via Creekside we get some simple and easy to read crunching from Brian-Michel, complete with this graph: 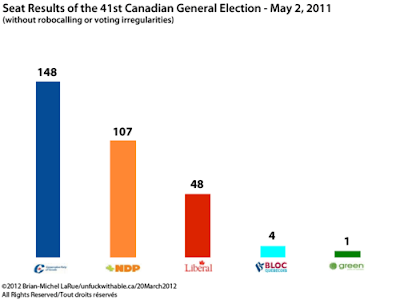 Of course, Dean del Mastro will be sent out at some point to state that no one can prove people didn't vote simply because "somebody" executed a strategy to mislead voters. Oh right ...

There is more, of course. Anke Kessler has done a rather thorough statistical analysis where she concludes:

In 27 of the 308 ridings, voters allegedly received automated phone calls containing false information on the location of their election site, or harassing them in the name of one of the contestants. The results suggest that, on average, voter turnout in those ridings aﬀected by the demobilization eﬀorts is signiﬁcantly lower than in the ridings where no automated phone calls have been reported. The point estimate gives 3 percentage points.  As such, the eﬀect is considerably smaller than the 50 percent reduction in turnout that Barton (2011) ﬁnds.  But since nothing is yet known about the total numbers of voters that actually have received a phone call,  if any,  those numbers are not comparable. Besides, Barton’s results are based on a framed-ﬁeld experiment with little consequence of failing to go to the polls and it may be diﬃcult to draw inferences regarding actual elections.  In either case, Barton also reports that pre-election warnings against possible fraudulent messages inoculates voters against misinformation eﬀects, and generally restores voter turnout.   If his  ﬁndings are taken at face value,  the  outlook is positive: having been warned, the Canadian electorate should now be guarded against any future attempts at demobilization.

Now, I'm pretty certain the average person would find Kessler's paper extremely difficult to read. It took me several reads to be able to agree with the conclusion above. It is worth reading the Introduction from the bottom of page 1 through page 2. As opposed to using just riding data, she bores into individual polling station statistics. What Kessler assesses is very telling.

Oh yes. Before dismissing Anke Kessler as some university student trying to make a name for herself, be aware that she is Professor Anke Kessler, Ph.D. in the Economics Dept. at Simon Fraser University.

One point made by Prof. Kessler that should bode well for future elections is that the electorate will be much more wary of attempts to suppress the vote.

That may be cold comfort if we have to put up with Harper and his vile brand of politics for a full four to five years. And, of course, there is another problem. Given that all evidence points to the Harper campaign as the perpetrators of a voter suppression effort, we have no idea what desperate tactic they will engage in an attempt to hold onto power. Unless we figure it out first.

Those results match what the polls were predicting: a stronger Conservative minority.

Too true. The catalogue of PNAC Karl Rove style manipulation - especially against blacks and in the U.S. South - has been covered for years by Brad Friedman at his Bradblog.