Were they police, or police agents? UPDATED

Well, there is certainly enough evidence to suggest so. You think not? Think again.

This photo, shamelessly robbed from the digital pages of Canadian Cynic, would suggest that the boots worn by both the officers of Surete de Quebec and the three "protesters" in question, are the same. 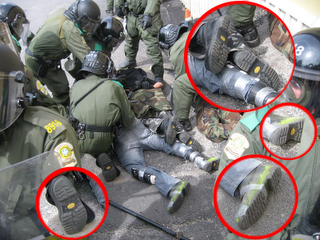 Yes, the little yellow tabs tell something of a story and, in fact, drew attention to something amiss. However, that tab is the trademark of Vibram®, a boot and shoe sole manufacturer. I have three different pairs of boots with that same little yellow tag on the sole - except that they appear on each sole at a different angle. Not so the tags in the picture.

What is telling is that the boots are the same. Same tread, same pattern. That is an amazing coincidence and any cop will tell you that kind of coincidence, when investigating any incident, is highly suspicious.
So, let's call that bit of circumstantial evidence the first reason to suggest there was a relationship between the uniformed police and the rock-wielding protesters.

The second thing that shows, from the video, can be broken into several parts, but we'll deal with two first.

When a member of an organization, (and I'll go to my own armed service experience here), is in a threatening situation and knows where the protection of his/her own organization is located, that is always the direction in which that person will move. It's a natural reaction. Even in the services where some people receive extensive training in "escape and evasion", the overriding factor is to safely find a way to get back to your own lines. There is no safety in putting more distance between yourself and the protection of your own kind.

From the time David Coles fingered the three as "cops", they started to move, not away from the Surete police line, but towards it. If the three had been legitimate protesters, being labeled a "cop" should have caused them to withdraw in the other direction - towards wherever their compatriots were gathered. And there would have been compatriots somewhere, even if it was people they had met only a short time before the protest started. These three protesters, carrying rocks, with faces masked, moved in the wrong direction.

The second thing that is telling is this:

The RCMP has refused to comment, while Quebec provincial police have flatly denied that its officers were involved in the incident.

But they were involved. They took these three guys into custody! The denial was made too quickly and without contemplating the entire incident. The RCMP refusal to comment is thundering. Not all that long ago a relative of mine in the media relations business (a.k.a. spin doctor) told me that when questioned, "no comment" or "refused to comment" meant one thing - there was something of substance on which not to comment. RCMP public communications officers are well-trained enough to know how such a response sets up further questions. They're cops. They know a suspect under questioning who does not respond to inquiries is hiding something.

Back to the actions of the three "protesters" and the Surete de Quebec police who took them into custody. Considering the state of the protest line in which the "three" drifted into, they would have presented an elevated threat to the police line facing. The other protesters were bare-faced, unarmed, perhaps a bit noisy, but otherwise presenting no particular physical threat to the police officers tasked with preventing the protest from moving. David Coles, in fact, seemed intent on keeping the protest orderly.

Then three masked, rock-carrying individuals showed up. Under any other circumstance, those three would have been considered a risk to the safety of the police on the line and perhaps the other non-violent protesters. Ignoring for a moment that these three moved themselves into the police line, consider the actions of the Surete officers and the so-called protesters from that point.

The police took them to the ground, cuffed them with cable ties, stood them up, left one of them masked and marched them off to a police detention van. All without a struggle! JesusHchrist on a popsicle stick! That has to be the easiest take-down in protest history.

When I did riot-control training, our "mock protesters" were normally other service personnel from another training course. They used to kick, bite and scratch and occasionally leave some hapless guy laying on the ground in the fetal position holding his crotch.

These three "protesters", intent on hiding their faces, carrying rocks, in rather good physical condition, who would have presented a physical threat and could be expected to put up a fight, suddenly became acquiescent and compliant. In fact, the police didn't even use the one immobilizing move which is standard in the case of a possible violent suspect - a knee in the middle of the back. In fact, at one point a "suspect" is laying on his side with one of the policemen exposed to a knee in the groin and nothing happened. The switch from masked, armed, potential rioter to law abiding, compliant arrestee is nothing short of amazing.

That's why Doug Kirkland doesn't believe they were bona fide protesters either.

And can all this circumstantial evidence make a case? Absolutely.

By way of example consider that you step outside in the early morning and notice that the streets are wet and most cars have their windshield wipers on but it's not raining. You can accurately deduce that, despite the fact that it is not raining now, it was raining a short time ago.

The evidence supporting the argument that they were members of a police force or acting on behalf of the police is there.

I would suggest taking a trip over to Dawg's Blawg where he has a list of posts on this subject. Good reading.

Update: This is just one of the reasons why I read Red Tory.
Posted by Dave at 14:56 Recommend this Post

Email ThisBlogThis!Share to TwitterShare to FacebookShare to Pinterest
Labels: montebello