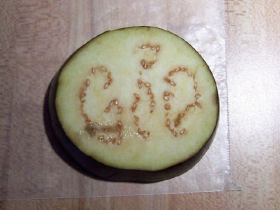 Via PZ Myers we learn of this amazing revelation.

Felicia Teske of Boothwyn says she was preparing fried eggplant for dinner Sunday evening and noticed that the seeds in one slice seemed to spell out the word "GOD".

Felicia says she bought the eggplant at a roadside produce stand a while back, and also says the discovery has really given her food for thought. Felicia told Action News that she recently had family members pass away and it is comforting that "GOD" appeared.

Felicia Teske and her husband put aside that slice of eggplant. But with the rest of it they had for dinner, which they say was simply divine.

The Teskes are now considering selling the eggplant on ebay.

Because a true believer always makes a profit. It's.... the Christian way! Sharing all that heavenly comfort - for a price.