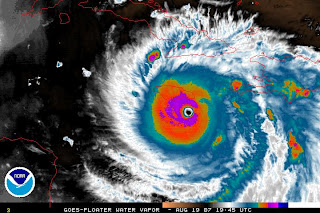 3 PM, 19 Aug 2007, Hurricane Dean has reached the eastern tip of Jamaica with the eye directly south of Morant Bay. The cyclone is tracking south of the island at the moment. A couple of wobbles shifted the track slightly south although Dean is continuing to track a West-Northwesterly direction at about 16 knots.

Kingston may avoid the absolute worst Dean has to offer. That is probably the best that can be hoped at this point as Jamaica is now experiencing high winds and heavy rains. The problem now is that Dean has two eye walls: the inner eye wall has a radius of about 7 miles and the 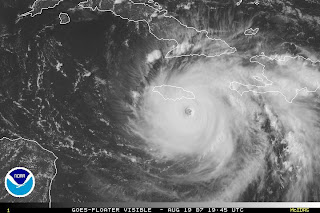 outer eye wall has a radius of about 19 miles. In order for Kingston and other southern areas of Jamaica to avoid the most extreme and dangerous winds of Dean, the hurricane will have to pass at least 25 to 30 miles south of the island. In relative terms the north coast of Jamaica will probably fare better than the windward south coast. I say relative because Montengo Bay, Discovery Bay, Clark,s Town, Ocho Rios, Port Maria and Port Antonio are all going to, (if they're not already), experience extremely high winds and rain from the spiral bands that extend out from the eye.

The wind field and moisture have developed into a relatively wide area and the south coast of Cuba now has a Tropical Storm Warning issued. That includes Guantanamo.

Weather observations out of Jamaica are somewhat thready. According to one report I picked up, the power in several areas was going to be shut off as a safety measure. The last pressure reading from Kingston was 998 millibars and falling rapidly.

The next few hours will tell us if those occasional wobbles saved Jamaica from a direct hit, but at the moment, a very near miss is the best they can hope for. The same may be true for the Caymans.

Computer model tracks have not changed significantly in the past several hours. Click on images to enlarge.

Update: Dr. Jeff Masters has an analysis and update on Hurricane Dean and its close pass on Jamaica.

Jeff is estimating that the winds in Kingston will, when analyzed, have reached in the range of 106 mph/171 kmh/92 knots.