It's time to reassess my belief system. There may be a Flying Spaghetti Monster after all.

I walk wherever and whenever possible. It's cheaper than driving and a lot better for me.

Today, I was on my way home from the grocery store, about 1 1/2 km from my house downtown, waiting to cross the street. When the "walk" symbol came up with the green light, I stepped off, watching the traffic for vehicles making right turns. It was clear until one of these came rushing up to the intersection and turned right without slowing. 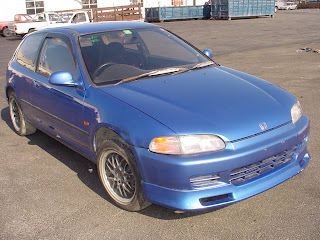 That would have been slightly annoying. The driver wheeled pretty close to my sandaled feet.

As he was making the turn, the male driver, whom I do not know, issued forth with a loud, "Fuck you!"

The passengers in the vehicle, two of them, were finding this display of low intelligence somewhat amusing.

Of course, because of the proximity of the vehicle and the drawing of attention of the driver, who was looking at me and not the road ahead, my eyes followed the little blue Honda Civic through its illegal and somewhat unsafe turn. 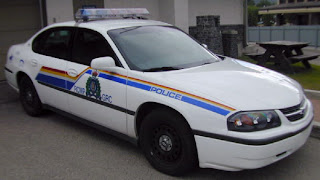 And my eyes came to rest on one of these.

I could see that the police car was stopped at the end of a line of traffic. The driver of the Civic, who was watching me, didn't notice that the traffic wasn't moving ahead of him.

Presumably he wasn't aware that the rear car of the waiting traffic was a clearly marked RCMP patrol vehicle or he might have used his brakes slightly sooner and with more force.

As the Civic continued on and became one with the rear of the police car I noticed one of these on the back of the Honda.

That is a part of British Columbia's graduated driver licensing system and indicates that the driver is a "Novice", often referred to as a "newbie", occasionally gaining the appellation, "nit wit".
Interesting thing about that "N": the driver is allowed to have one passenger in the car. The Honda had two plus driver as it came to an unexpected stop in the collapsing bumper of the patrol car.

The constable got out of his unit, shaking his head and waved the young occupants of the car over toward the adjacent building, careful to ask if anyone was injured. Shoulders slumped and kicking at the sidewalk, the driver and his pit crew complied.

Then the cop interviewed me. "Did you see the whole thing?" he asked.

Everything. In fact, I not only know that he rear-ended you, I know why.

I gave him every detail, and I mean every single one. Another police vehicle arrived and we quickly discussed my statement. I hastened to point out, by counting aloud, that there were one, two, three people in the car and isn't that a pretty coloured "N" on the back.

The city just got one more bus rider and I'm starting to believe in the supreme pasta.
Posted by Dave at 17:24 Recommend this Post