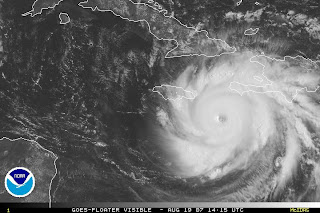 At 10 AM, 19 Aug 2007, Jamaica time, Hurricane Dean was approximately 155 miles/250 kilometers southeast of Jamaica tracking in a WNW direction at approximately 16 knots (18 mph/30 kmh). If it maintains the same speed and track, the centre of Dean will directly contact Jamaica at around 7:30 PM today, Jamaica time.

Hurricane Hunter aircraft flying into Dean this morning encountered peak flight-level winds of 142 knots (163 mph/263 kmh) in the northwest quadrant. The diameter of the eye has increased and there is an expectation that a broader wind field will develop leaving a wider path. Pressures have risen slightly indicating a slight weakening, although Dean remains a dangerous Category 4 cyclone. The NHC is also indicating, and I agree, that this is a temporary condition and once Dean reaches the abnormally warm water west of the Caymans its intensity will likely increase.

If you take a look at the water vapor loop, you can see a couple of distinct wobbles to the west. While they don't provide a reason for huge optimism, if that tendency continues, there is a slim possibility the eye could pass south of Jamaica.

Updated computer models don't provide much new information from the last graph with all models now showing a second landfall on the Mexican gulf coast.

I have seen at least two reports from commercial media which indicate that the danger to the US gulf coast has diminished. That's simply not the case. Presumably those reports were based on viewing the track projections of the computer models. Those models are based on best information at the time they are produced. Things can change along the track at any time and cause Dean to move wildly in any direction. The skill of the models at forecasting ahead varies considerably and when forecasting 96 hours or more ahead of the track, the accuracy must be taken lightly. The breadth of the wind field also has to be taken into account. Dean's eye might make landfall in one place but the effects of the entire system can be just as devastating across 60 miles/100 kilometers of coastline. Dodging the eye does not mean there won't be torrential rain and significant storm surges.

Hey! It's a hurricane. It doesn't have a program.