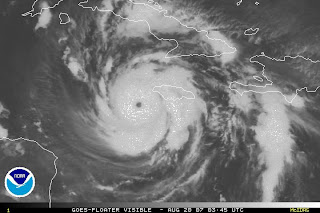 The eye of Hurricane Dean is now passing the western tip of Jamaica. That doesn't mean Jamaica is out of the woods yet. Dean will leave several hours of high winds and rain behind as the cyclone moves to the west. The centre of the hurricane came within about 20 nautical miles of the southern most tip of Jamaica and subjected Kingston to Category 3 hurricane force winds. We will have to wait for several hours to hear what the extent of the damage is. It could have

been worse, but not by much.

Dean is now strengthening. The eye has reorganized, as expected, and now has a single eye wall with a diameter of about 15 nautical miles. The pressure has dropped to 925 millibars and Dean is maintaining velocity. With low wind shear and high sea temperatures there is expectation that Dean will reach Category 5 over the next 24 hours or so.

Computer models show a track slightly more south than previously and the outlier GFDL is now agreeing with all other major models. If Dean actually stays within that track envelope then Grand Cayman Island will not suffer a direct hit, nor will Cozumel. The question is: Does Dean have the program? All the weather systems in the Caribbean which will steer Dean to its Yucatan landfall seem to be holding well.

Once Dean has moved off the Yucatan it should be considerably weaker, although the water temperature and low wind shear may allow it to re-strengthen once in the Gulf of Mexico. One of the problems is that the forecast track, which took Dean over the Yucatan at something of an angle, has shifted and now Dean is forecast to take the shortest route over the peninsula. That will have less effect to weaken it. 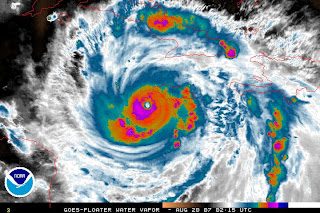 I would still be concerned about the heavily populated areas of Mexico, including Mexico City.

In the meantime, the water vapor loop shows how Dean has expanded and gives a good indication of its present track. Dean is on a track 10 degrees to the north of due west with an indicated speed of advance of 17 knots (20 mph/31 kmh).

NEW INFORMATION HERE.
Posted by Dave at 21:44 Recommend this Post