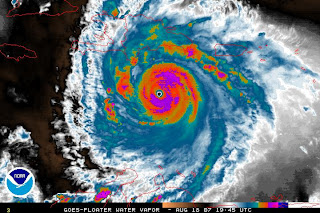 Hurricane Dean's legacy is already being felt. It killed a 62-year old man on St. Lucia attempting to save a cow from floodwaters and, during a mudslide on the island of Dominica, a mother and child were killed in their home.

Eric de Lucy, president of the banana producers union for the two French islands, estimated the cost of the damage to be between 100 and 120 million euros ($134.5 to $161.4 million) and said he would be asking the French government for help.

"There are considerable economic consequences for this sector because there is not a single banana plant left standing in Martinique and more than 80 percent of the banana plantations in Guadeloupe are affected," he told France Info radio.

The worst is yet to come.

Based on the latest projections coming from computer models and by a read of the weather on either side of the path of Dean, nothing can prevent Jamaica from taking a direct hit.

It is very likely that, by this time tomorrow, Jamaica will experience one of the worst hurricanes in their history, with Dean arriving as a Category 4 (or possibly 5) cyclone. The Caymans, which took a big hit from Hurricane Ivan in September 2004, are also likely to receive Dean at full force.

The Yucatan peninsula is almost certain to get hit. The Mexican resort areas in that region are now at extreme risk. Additionally, Dean is moving quickly, so any hope that it might ease significantly as it passes over the Yucatan are pretty much gone. This one will probably keep moving, dropping to perhaps a Category 3 (maybe a 2) as it makes landfall and then increasing again slightly as it reaches the warm waters of the Gulf of Mexico.

It is unlikely that Dean will connect with the upper-level low off Florida so, for the time being, Louisiana is probably safe. The Texas gulf coast may not be so lucky. As I sip from my Corpus Christi coffee cup, there is reason for concern in that area.

The computer models, including GFDL, are showing more agreement now as the time projection to a landfall shortens.

I have a concern which others have not yet expressed, and maybe it's a little early in the game to be putting it out, but based on 4 out of 5 models, this hurricane will move inland into a heavily populated area of Mexico and dump huge amounts of water.

I'll try and update in a few hours. In the meantime, this is an interesting loop which shows the speed of Dean compared with other weather systems to the east and northwest of it.