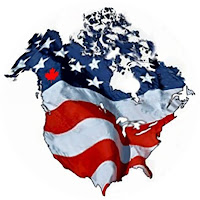 Thomas d'Aquino is head of the Canadian Council of Chief Executives, which is widely credited for having written the SPP, and Canadian secretariat chair of the North American Competitiveness Council, the only outsider group represented at the Montebello summit.
He can't figure why we're all so upset about the SPP.
It's about "expanding border crossings and information-sharing programs on plant and animal safety," he says.
[Ed. : Something about people safety would have been far better here, Tom]
Tom then issues us with a challenge to prove his point.
Referring to the NACC report following the February summit, he says, "If I give it to you to read at 11, I guarantee you'll be asleep by 11:10."
Well as it's just coming up on 11 right now, what say we trot on over to the home of that NACC report at the CCCE website and give it a try.
Here we go : Private-Sector Priorities for the Security and Prosperity Partnership of North America(SPP)
See, right away, Tom - Private-Sector Priorities. We didn't vote for the guys who wrote this.
But you're right - it is a serious snore. 11:07 - only a few minutes left.
Mind if I have a quick look around CCCE while I'm here?
April 28, 2006 "Lumber Deal Welcome; Demonstrates New Focus on Boosting North American Competitiveness"
Well, Tom, what we wanted was a softwood lumber deal that was good for Canada, not for North American business.
But this looks interesting :
Feb 21, 2006 From Bronze to Gold : Repair the Canada-US relationship :

"As our Council made clear in launching our North American Security and Prosperity Initiative in 2003, it is in Canada’s fundamental interest to pursue bilateral and trilateral agreements that will keep our border with the United States as open as possible, and this requires hard work on issues related to security as well as the meat and potatoes of economic linkages...

In this context, we would restate our view that it is in Canada’s interest to participate in the ballistic missile defence program."