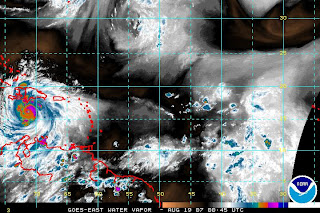 Little has changed in either the track, speed or strength of Hurricane Dean. It continues on a West-Northwesterly track at a speed of about 16 knots (18 mph/29.6 kmh) on a direct course for Jamaica. Wind speeds remain at an intensity of around 130 knots (150 mph/241 kmh). Jamaica is, at the time of writing, (10 p.m. Jamaica time) experiencing winds under 10 knots and clear skies. That is literally "the calm before the storm".

There will be some fluctuation in the intensity. This is caused by the presence of a double eye-wall reported by the morning Hurricane Hunter flight.

I recommend viewing the Water Vapor satellite loop. The upper level low coming off Florida is clearly visible to the west of Florida and Dean's eye is distinct. As the ridge builds this will keep Dean on a westerly track. I watched one US television weather reporter suggest that Dean could connect with the upper level low and swing North. As you can see from the loop, that is highly unlikely. Dean is not moving quite fast enough to catch up with that system.

The computer models are starting to show concurrence and all of them show a landfall on the Yucatan, then a second landfall from the Mexico/Texas border down to several lines further south. GFDL has shifted significantly which means it is now discounting the upper level low. The BAMM (green track) is a line I would have a tendency to treat as the least likely path.

UPDATE: Dr. Jeff Masters has some interesting information regarding the history of hurricanes and Jamaica. As he points out, hurricanes can do a last minute wobble and this was actually the case when Hurricane Ivan (Cat4) and Hurricane Allen (Cat5) took sudden turns around Jamaica and spared them a direct hit. Hurricane Gilbert, unfortunately, did not.

As Jeff notes, there have been indications that Dean is tending more due west, so perhaps, just perhaps there is a chance of avoiding a devastating direct hit if the cyclone moves in such a way as to pass just south of Jamaica.

There are reports that Dean claimed yet another life as a young boy was pulled into the churned up surf on the shore of Santo Domingo, Dominican Republic. Further reports are saying that five houses were destroyed in the same area.

Tourists in both Jamaica and the Cayman Islands have been jamming the airports in an attempt to escape Hurricane Dean before it arrives.

Jamaica was scheduled to hold general elections this Monday. Given that, even if Dean misses Jamaica, there will be severe damage and flooding, Prime Minister Portia Simpson Miller has called for a halt in the campaigning. The elections may be postponed until the emergency is over.

NASA has ordered the space shuttle Endeavor to return to Earth on Tuesday. There are fears that the Mission Control centre in Houston, if Dean was to hit the Texas coast, might be threatened.

NEW INFORMATION HERE.
Posted by Dave at 18:42 Recommend this Post