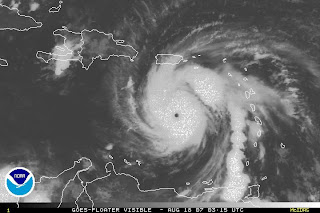 Transocean, Royal Dutch Shell and Murphy Oil have pulled workers off their oil rigs in the Gulf of Mexico. Other companies are also starting to pull workers off the Gulf rigs which sit on one-third of U.S. domestic crude oil and 15 percent of native U.S. natural gas.

Hurricane Dean has maximum sustained winds of 125 knots (145 mph/233 kmh) and is now a Category 4 cyclone. Intensity is increasing as the pressure in the centre of the hurricane drops.

The Hurricane Warning Center is predicting surface winds of 140 knots (161 mph/259 kmh) within the next 72 hours, putting Dean into Category 5.

My own feeling is that it will reach that stage earlier. Dean is now over incredibly warm water. 100 nautical miles ahead and directly in the path of the hurricane is the 6 meter NOMAD data buoy 42059. That buoy is reporting a sea surface temperature of 83.8 degree F/28.8 C, substantially warmer than is usual. Seas at the buoy are starting to increase (13+ feet) and the barometric pressure is starting to fall.

ublic and a Hurricane Watch has been issued for Jamaica.

Update: It's worth taking a look at the 2100Z computer model tracks. The GFDL track which had been forecasting a landfall on the Louisiana coast has changed. It now forecasts a landfall in the middle of the Texas gulf coast. GFS and NOGAPS models have also updated to show a Yucatan landfall and then across southern Mexico. The UKMET model has not changed because it has not yet updated.

There is an interesting side note to this. George Bush, currently vacationing in Texas, will be in Montebello, Quebec, along with Mexican President Felipe Calderon right about the time Hurricane Dean makes landfall and tears up the landscape.