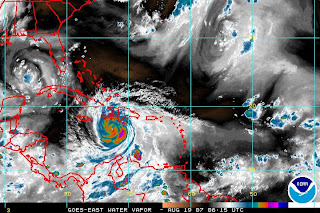 The leading edge of Hurricane Dean is showing up on weather observations from Kingston, Jamaica. Winds have increased to 12 knots (14 mph/22 kmh) from the North.

The US National Hurricane Center reports, from imagery gained from a USAF Hurricane Hunter flight, that the centre of Dean has become a little disorganized. The data has shown two concentric eyes with a 10 mile radius and a 20 mile radius.

Winds appear to have dropped, although NHC is assuming the maximum velocity was not

sampled. NHC is calling the maximum velocity of winds at 125 knots (144 mph/232 kmh) although the forecaster is suggesting that may be a touch on the high side. The barometric pressure however, has dropped to 918 millibars. As the centre reorganizes intensity will likely increase.

There were a few moments of hope when Dean wobbled and its trajectory flattened directly to the west. However, it appears to have resumed its WNW tendency and remains on course for Jamaica.

New computer model tracks indicate a longer period over the Yucatan which will cause some significant weakening once Dean is over the Gulf of Mexico, however, given its strength, it will still make landfall on the gulf coast as a major hurricane.

Some of the tracks, GFS in particular, put Mexico City directly in the path of Dean's advance. As ominous as that appears, it is too early to tell if that will actually occur.

NEW INFORMATION HERE.
Posted by Dave at 00:26 Recommend this Post