Hurricane Dean. Brace yourselves. This one is already a killer. 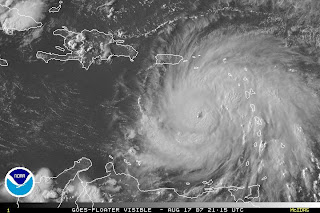 Hurricane Dean slammed into Martinique and St. Lucia at about 5 A.M. Eastern with winds in the 100 mph/160 kmh range. On St. Lucia a 62 year-old man was killed when he tried to rescue livestock from rapidly rising floodwaters brought on by Dean's torrential rains.

Dean is now a Category 3 Hurricane which is increasing in intensity and expanding. As it moves westward at about 18 knots (21 mph/33 kmh) it will continue to grow in both intensity and area. It will pass close to or directly touch Jamaica and the Cayman Islands, as a Category 3 major hurricane or stronger, by midday this Sunday.

Most computer models have Dean making landfall, after passing through the Caribbean Islands, on the Yucutan Peninsula. The problem is that the type of upper-level low system produces different results in different models. After an initial landfall in the Yucatan, four computer models put Dean making a second landfall, sometime on 22 August, either south of or near the Texas/Mexico border.

The National Weather Service/Geophysical Fluid Dynamics Laboratory (GFDL) model is showing a swing northward into Louisiana and making landfall as a Category 4 hurricane.

The problem is, as Dr. Jeff Masters points out, is that the models have varying degrees of performance accuracy. Most do well in providing forecast accuracy for the next 48 hours but fall off significantly beyond that.

The residents of the Texas gulf coast can be excused for thinking they were just hit with a big weather bomb. Tropical Depression Erin slammed in with high winds and unbelievably heavy rain.

Erin dropped over 10 inches of rain near San Antonio, and areas near Houston received nine inches. Over 70 high water rescues were performed in the Houston area from Erin, and four people died in Texas due to flooding. The region encompassing Corpus Christi, Austin and Houston has already surpassed its average yearly rainfall total, with 40-48 inches having fallen.

What is going to make this all the more serious is that Hurricane Dean, is on a path that may take it directly into the Texas gulf coast. Having had no time to allow the water from Erin to recede, Dean could cause massive flooding on the coast and further inland within the next five days.

There is a kicker here too. The sea surface temperatures (SST) in the Gulf of Mexico have reached the record levels experienced in 2006. That means when Dean passes into the Gulf, if it doesn't weaken significantly over the Yucatan, it will probably increase in strength, carrying with it huge amounts of water and kicking up a massive storm surge. The overly warm water of the Gulf will simply feed Dean.

It looks as though Jamaica, Grand Cayman and the Yucatan are definitely going to wear this one. Beyond that, it's a guess as to which part of the Gulf coast will be the target of the second landfall, but unless something very, very strange happens, this coming Sunday and then Wednesday could be days of disaster for several communities.

For information on the various computer models used to assist in forecasting hurricanes, go to this page at the Weather Underground.

Compiled with information from the US National Hurricane Center and Dr. Jeff Masters.
Posted by Dave at 16:30 Recommend this Post