The PDB that Bush ignored 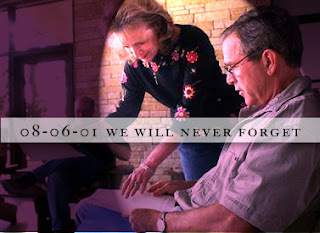 August 6th, 2001, saw George W. Bush at his ranch in Crawford, Texas. Having had his presidency decided by the Supreme Court, he felt secure enough in his position, 7 months in, to take a vacation.

On that day he was handed this document. A Presidential Daily Briefing containing a warning:

FBI information ... indicates patterns of suspicious activity in this country consistent with preparations for hijackings or other types of attacks, including recent surveillance of federal buildings in New York.

The report identified Osama bin Laden as the focus of that activity.

The next day, Bush, in an effusive mood, went golfing. He encountered a couple of reporters who noticed.

During the month of August, 2001, Richard Clarke and eventually George Tenet, then Director of the CIA, were going into nervous fits. Things were happening in the bin Laden world and they didn't like the smell of it.

When the PDB of 6 August, 2001 was delivered to Bush, (not by George Tenet, but by one of his lesser subordinates), it should have caused somebody to stand up and take note. Former State Department head of counter-terrorism, Larry Johnson, who has written many PDBs described the average brief as a paragraph or two long. The 6 August brief was a page and a half. That amount of detail, with that amount of warning should have, in Johnson's estimation, caused the entire Presidential ranchocade to saddle up and beat a hasty path back to Washington.

Seventeen days later George Tenet was briefed on the report by the FBI Minnesota field office that Zacarias Moussaoui had been taking flying lessons - in a 747 trainer. According to Tenet, he didn't brief Bush because the two were out of touch. Bush was in Texas.

Then National Security Advisor, Condoleeza Rice, wasn't in Texas either.

The PDB should have been enough, but once combined with the information of Moussaoui taking lessons on a 747 trainer alarm bells should have been set ringing in the White House inner circle.

Thirty-six days later, the World Trade Center towers came down. And the person who orchestrated it, the person George W Bush was warned about, remains at large, no closer to capture than he was 6 August 2001.

George W. Bush, President of the United States of America and the so-called "leader of the free world" had failed to heed a critical warning and allowed one of the most heinous acts of terrorism ever to occur in North America to proceed unchecked - on his watch.
Posted by Dave at 13:55 Recommend this Post