I have reversed those two cyclones alphabetically because of the inherent threats each one represents. TS Lisa has been with us for a while but remains a weak system and presents less risk to population. Matthew developed overnight and is now the subject of Hurricane Warnings and Watches in Central America. 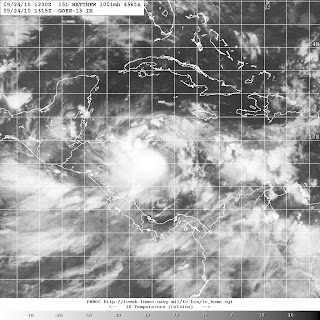 Tropical Storm Matthew is something of a guessing game at the moment. Track models vary significantly. Because of this the intensity forecast is also very thready since the route Matthew takes will have an effect on its intensity.

Matthew has been given an initial intensity of 45 knots (83 kmh/52 mph) keeping it well below hurricane strength for the time being. It is located 170 miles (275 km) East-Southeast of the Nicaragua/Honduras border, tracking in a westerly direction at 14 knots (26 kmh/16 mph). The cyclone will probably track West-Northwest and slow somewhat over the next day or two. After that the official forecast is that this cyclone will start to track North into the Gulf of Mexico. The NHC gives that forecast a low confidence. None of the intensity models have Matthew becoming a hurricane before making landfall however, caution suggests that hurricane preparations for Nicaragua and Honduras are prudent.

Hurricane Warnings are flying for Puerto Cabezas Nicaragua to Limon Honduras including the offshore islands.
Hurricane Watch is in effect for the coast of Belize.
Tropical Storm Warnings have been issued for Limon Honduras westward to the Guatemala border.

Tropical Storm Lisa presents no threat to population although there is some risk to shipping. Located about 295 miles (475 km) Northwest of the Cape Verde Islands, Lisa is tracking Northeastward at 4 knots (7 kmh/5 mph). Max sustained winds are 35 knots (65 kmh/40 mph). 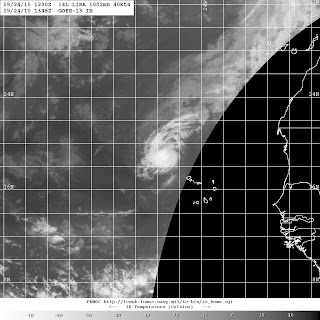 Lisa is expected to move northward and weaken as it comes under the influence of increased wind shear.
Posted by Dave at 07:12 Recommend this Post