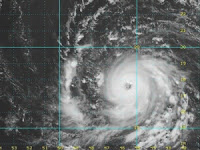 Something has been bugging me about this ever since I heard it on a radio broadcast. Two things actually, but in order of the way they appeared on my plate.


“I have seen flooding, but I have never seen anything like this,” said Mr. Harper, surveying the damage Friday in Trouty, one of dozens of towns coping with flood waters, downed power lines and washed out bridges and roads after Igor blew through on Tuesday.
“I have never seen damage like this in Canada. Where we were standing at one point, the water would have been over our heads here,” he said.

Now, I don't disagree with the prime minister surveying the devastation wrought by a tropical hurricane on very un-tropical Newfoundland. In fact, it was absolutely necessary that he make the trip. But that statement has been bugging me. He's never seen anything like it.

Maybe that's the case. I'm certainly not going to dispute it. However, first we have Harper telling us where the flood waters were, even though he wasn't there and secondly, he fails to acknowledge what actually happened.

A politician chose to take the spotlight and act as a spokesman for somebody else. He doesn't know where the flood waters were; someone else told him. And since Harper was being so authoritative in his assessment and analysis why didn't some reporter simply nail him right then? Question: Isn't it a bit odd for mid-latitude Newfoundland to take a direct hit from a tropical Atlantic Category 1 hurricane? Since you're providing details would you explain how that meteorological event evolved?

Think about it. We've got intact tropical hurricanes, still with all their tropical characteristics, making direct hits on landmass at 47 degrees north latitude. The federal government's head politician says he's never seen anything like it. The same politician who refuses to take any action to curb, or even acknowledge the existence of the anthropogenic contribution to global warming.

Never seen anything like it before in Canada? Wait for it; there's a lot more to come.

And yes, there is one more thing bugging me. Strangely, this trip by Harper got some pretty wide coverage. Why would the readers of the Boston Globe or the mono-synaptic lint pickers at Fox News give a tinker's damn whether the Canadian prime minister is visiting Newfoundland to survey the damage? It must have been a slower news day than the ones where Felipe Calderon did the same thing in his country.

Update: I'm going to toss this link here for now. There is a lot more to add and there will be a lot more on the subject of extreme weather events. I'm sure the PMO kids are weighing the value of sending the leading example of poor physical fitness to northern Vancouver Island.
Posted by Dave at 08:59 Recommend this Post

I too have been stunned at the extent to which the media has gone to promote Harper's visit. I mean, all he did was walk around the place but with the amount of coverage that he's been given, it is as if he had been sandbagging the island weeks before Igor hit.

Baffling, to say the least.

Not baffling if you think about it.

This was a stage managed event. The kids in the PMO boxed and packaged the whole trip. Then they sent out a press release to AP. Thus, the US media stuffed it onto their "everyday" news.

Everything this guy does is about him.