The Cons : long on guns, short on memory 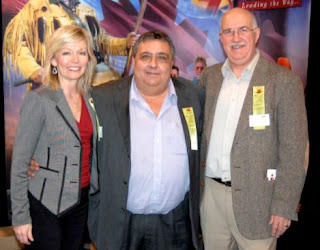 Bernardo, a frequent guest on NRA chat shows updating U.S. gun owners on the fight to kill the Canadian registry, said the NRA was instrumental in helping him set up his Canadian lobby group, CILA, the lobbying arm of the Canadian Shooting Sports Association (CSSA), and a mirror group of the Institute for Legislative Action, the NRA's lobbying arm.

Bernardo : "We have been working hand in hand with the NRA regarding international issues for the past three and a half years."

"The NRA’s Canadian Situation Infommercial ... was entirely set up by CILA. Its production cost was over $100,000 and was entirely paid for by the NRA."

"While Brant was working with [Con MP] Garry Breitkreuz, he acted as liaison with the CSSA on a variety of gun-related issues, including the long-gun registry. The CSSA worked with the MP's office on Bill C-301 and later Bill C-391," explains Bernardo."

"I’ve never spoken, e-mailed, had any contact. I don’t know anyone at the NRA."

Okey dokey then.
Posted by Alison at 02:38 Recommend this Post

Ah there she is, I see she fixed up her mullet all nice for the rednecks of the NRA.

Yes, I know that outside of the urban areas this kind of administration is a nuisance, but more importantly the registry underscores the the dangerous nature of firearms.

If the Americans are confused on this point (even with all those postal-type killings), we shouldn't be.