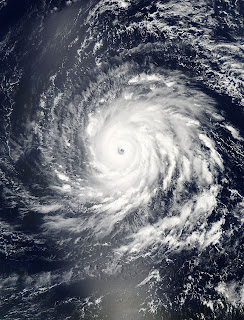 The Atlantic just north of the Inter-Tropical Convergence Zone is a nasty place to be this morning. Two hurricanes are working their way westward across the tropical North Atlantic.

Hurricane Igor flirted with Category 5 yesterday as wind speeds reached 130 knots (241 kmh/150 mph). Initial wind speed has reduced to an estimated 115 knots (213 kmh/132 mph) although broad atmospheric conditions are well in line to support a restrengthening over the next two to three days. Central pressure is currently 945 mb.

Igor is located about 750 miles/1200 km east of the northern Leeward Islands tracking in a West-Northwest direction at about 7 knots (13 kmh/8 mph). The cyclone is expected to slowly recurve poleward and take a classic route around the subtropical ridge. It's still far too early to forecast any possible landfall, but most models are suggesting that Igor will spend most of its time at sea. The unknown factor is Julia. Now that it has increased to hurricane strength there is a greater chance that the two systems will begin to have an effect on each other. That could change Igor's forecast track significantly. Correspondent on Antigua is reporting large swells making an appearance.

Julia became a hurricane, the fifth of the Atlantic season, early today. 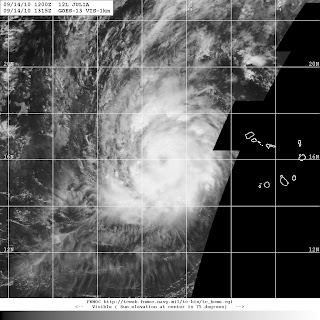 It is located 330 miles/535 km west of the Cape Verde Islands tracking West-Northwest at 10 knots (19 kmh/12 mph). Maximum sustained winds are estimated at 65 knots (120 kmh/75 mph). Julia will probably strengthen a little however, the sea surface temperatures along the forecast track become cooler for a short spell which should limit Julia's strength. The upper air divergence (outflow winds) from Igor will likely have the effect of increased wind shear on Julia which will also limit strengthening.

Note: The forecast track for Igor shows a direct hit on Bermuda. This should be viewed very carefully since it is the 5 day forecast track. The actual track could extend to either side of the cone or anywhere in between. And, the track forecast will likely change as the hurricane progresses.

Inspired me to get a Hurricane app for my iPhone.

I lived through Hurricanes David (Cat 5) and Frederic (Cat 4) within a few days of each other in 1979 and they were life-changing experiences.

That was some Club med vacation, let me tell you.

Never been to a Club Med, but I'm guessing there are supposed to be activities other than hurricane dodging on the menu.

I would not have missed this experience for anything -- although it did play havoc with my suntanning plans.