Igor has weakened slightly this morning, Julia handed us all a surprise by strengthening to Category 4 and Karl has made landfall in the Yucatan. 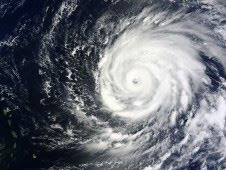 Hurricane Igor is a massive Cat 4 cyclone with a wind field that stretches about 550 miles (885 km) across. Currently located about 540 miles (870 km) East-Northeast of the northern Leeward Islands and about 1050 miles (1700 km) Southeast of Bermuda, Igor is tracking West-Northwest at about 7 knots (13 kmh/8 mph). After pushing to the top of the Cat 4 scale last night there was some weakening overnight. The cloud tops have showed some warming and the inner eyewall has shown some deterioration. An outer eyewall has formed and while this normally weakens a cyclone, Igor is not expected to weaken much more over the next day or two. Sustained wind speeds are estimated at 115 knots (213 kmh/132 mph) with considerably higher gusts.

It is still too early to make landfall predictions although more and more it appears Bermuda could wear the brunt of Igor. 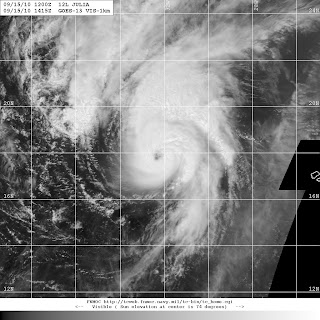 Hurricane Julia suddenly increased in intensity last night giving forecasters and some of the models a surprise. The cyclone moved quickly to a Cat 4 storm. Julia is currently located 595 miles (955 km) West-Northwest of the Cape Verde Islands tracking in a Northwesterly direction at about 13 knots (24 kmh/15 mph). It has sustained winds of 115 knots (213 kmh/132 mph). Although well developed, Julia is starting to the feel the effects of Igor's outflow winds and shear from an upper air low. It will soon start to encounter lower sea surface temperatures which will begin to cause weakening sometime in the next 24 - 48 hours.

This cyclone presents an extreme risk to shipping but currently presents no threat to population. 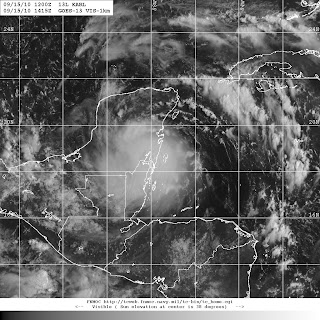 Tropical Storm Karl spawned rapidly and powerfully from a depression to a well organized tropical storm. Low wind shear and high sea surface temperatures fed this system and the forecast now suggests that Karl, having made its first landfall on the eastern Yucatan will eventually restrengthen over the Bay of Campeche to a Category 1 Hurricane before making a second landfall somewhere on the east coast of Mexico. Karl's landfall was just north of Belize at 1245Z (UTC/GMT) with estimated winds of 55 knots (102 kmh/63 mph). Because Karl is not a large system there is a possibility that its deterioration over the Yucatan will hamper its development once it moves out into the Bay of Campeche, however, the conditions are ripe to feed this system as it can once again move from a depression to a hurricane.