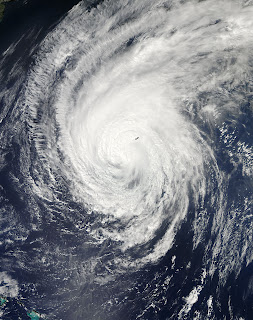 Hurricane Igor gave Bermuda a serious pummeling yesterday evening with the centre passing just a little over 40 miles to the west of the island. Correspondents reported widespread power outages and several storm related injuries at the island's medical facilities. Bermuda is well used to hurricanes and the stringent building codes minimize the losses due to storms.

Igor has accelerated its forward motion and started a northeastward recurve. The deep convection associated with tropical cyclones has started to wane. Located about 900 miles (1450 km) Southwest of Cape Race, NFLD, Igor is now tracking in a North-Northeasterly direction at 21 knots (39 kmh/24 mph). It has max sustained winds of 65 knots or less (120 kmh/75 mph). As Igor transitions to an extra-tropical cyclone is now presents a threat to coastal Nova Scotia and Newfoundland.

High winds and heavy rains can be expected along the southeast coasts of both provinces with occasional intense squalls.

A Tropical Storm Watch has been issued for Newfoundland from Stones Cove northward and westward to Jones Harbour.

This should make iceberg alley a really interesting place to be.
Posted by Dave at 08:18 Recommend this Post