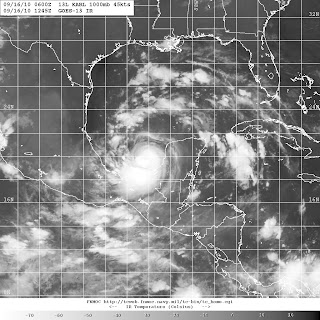 Hurricane Alley has a story this morning and it's Tropical Storm Karl. The cyclone emerged from the Yucatan virtually intact and about 30 miles (50 km) south of the original forecast. Karl moved over the Bay of Campeche to be met by less than 5 knots of wind shear and sea surface temperatures that in some spots are higher than 30 degrees C. All conditions are very favourable for rapid intensification and there is little doubt that Karl will grow very rapidly to become a hurricane over the next 12 - 36 hours.

Karl is currently located in the southeastern section of the Bay of Campeche tracking West-Northwest at about 8 knots (15 kmh/9 mph) with sustained winds showing an initial intensity of 55 knots (102 kmh/63 mph).

Hurricane Watches have been issued for the east coast of Mexico from La Cruz southward to Palma Sola. Karl is forecast to be near the Mexican coast as a hurricane late Thursday or early Friday. Hurricane Warnings will likely be issued for that same coast later today. 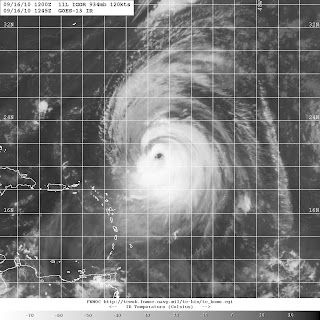 Hurricane Igor intensified over night with sustained winds of 125 knots (232 kmh/144 mph). It remains a Category 4 cyclone presently located about 440 miles (710 km) East-Northeast of the northern Leeward Islands and 955 miles (1535 km) South-Southeast of Bermuda. The hurricane is tracking West-Northwest at about 6 knots (11 kmh/7 mph).

Igor is in an area of low wind shear and high sea surface temperatures which support the cyclone remaining a very dangerous hurricane for the next few days. Igor is expected to recurve as it moves around the subtropical ridge. The threat to Bermuda is increasing. 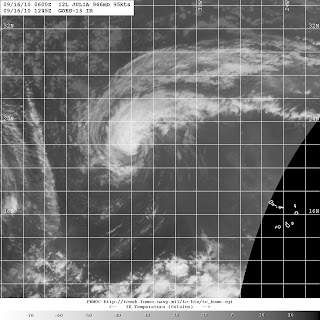 Hurricane Julia is weakening as it feels the effect of divergence from Igor. Upper level wind shear is increasing and Julia is entering an area of cooler water. It should start to gradually weaken in the next 24 hours and thereafter experience a more rapid decay.

Julia is located about 875 miles (1410 km) West-Northwest of the Cape Verde Islands and assumed to be tracking northwest at about 16 knots (30 kmh/18 mph). Maximum sustained winds are estimated at 90 knots (167 kmh/104 mph) with decreasing intensity as it moves along its track.

Julia is a threat to shipping but currently poses no danger to populated land areas.

The satellite image below shows all three Atlantic cyclones: Karl to the left, Igor in the centre right and Julia off to the extreme right. (As always, click on any image to enlarge). 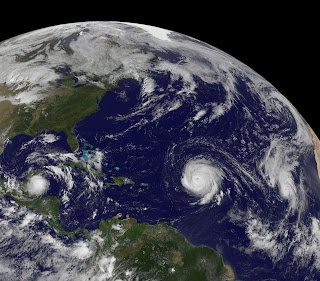