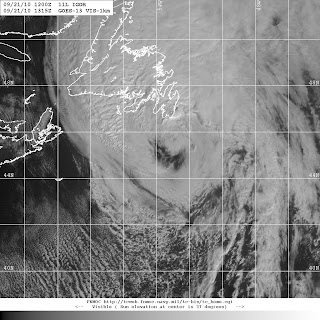 Igor remains a Cat 1 Hurricane as the centre approaches the coast of Newfoundland. At 0930 NDT Igor was 155 miles (290 km) South-Southwest of Cape Race tracking Northeast at 35 knots (65 kmh). Given that movement at the time of this report the southeast coast of Newfoundland will be at the closest point of approach of the tropical cyclone. Igor still has winds of 65 knots (120 kmh/75 mph) with expected increases to a sustained 75 knots.

Heavy rains have already fallen in many areas and Sagona Island and St. Pierre have reported hurricane-force gusts.

Hurricane watches are issued for coastal Newfoundland from Stones Cove northward and eastward to Fogo Island.

Tropical Storm Warnings are issued for coastal Newfoundland from Burgeo northward and eastward to Triton; Islands of St. Pierre and Miquelon.

There was an expectation that this cyclone would have made the transition to extra-tropical by this time (developing a frontal pattern) however this has been slow and there has been some new pockets of convection developing ahead of the centre. While Igor has lost many of its tropical characteristics, it remains a tropical cyclone until it transitions probably later on this evening.

Some areas under warnings and watches should expect hurricane-force winds and also extremely heavy rainfall. Great quantities of moisture will be released by Igor in a very short time.

And just so the entertainment doesn't end, Tropical Storm Lisa has emerged in the tropical eastern Atlantic. 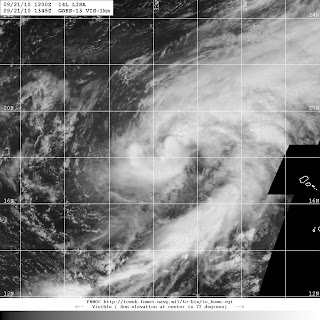