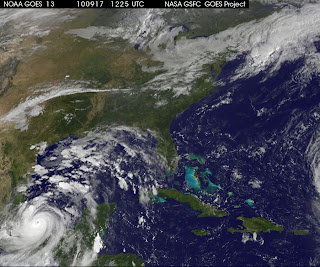 Hurricane Karl strengthened remarkably through Thursday to become a Category 3 cyclone. It's position at 1200Z (7 am CDT) was 50 miles (80 km) Northeast of Veracruz, 150 miles Southeast of Tuxpan on the east coast of Mexico. The hurricane is tracking due West at 8 knots (15 kmh/9 mph) which would put landfall for the centre of the system about 5 hours away.

The east coast of Mexico is already getting the Tropical Storm force winds and moisture from Karl. The estimated maximum sustained winds are 105 knots (195 kmh/121 mph).

Aside from extreme winds, Karl will release large quantities of moisture in the form of torrential rains. Hurricane force winds are estimated to extend outward 25 miles (40 km) from the centre. Tropical Storm force winds have a radius of about 105 miles (170 km).

A destructive storm surge of up to 4.6 meters (15 feet) should be expected along the coast accompanied by violent waves.