Yes, it's warmer out there

Unless you live in areas bordering the mid-latitudes of the Eastern Pacific. (That would be BC, Washington State, Oregon and some of California in the Northern Hemisphere and the western shore of central South America.)

This is just Canada. (click on any image to enlarge)

That is the departure from "normals" and it produces a startling rise in spring temperatures. The redder it is, the greater the increase from the 63 year normal. From Environment Canada (where you can also get a copy of the Throne Speech)

[S]pring temperatures have warmed over the last 63 years by 1.7°C. The winter season shows the greatest warming of any season, but all seasons have shown a warming trend since 1948.

And that is causing a rapid melt of a lower than average snow pack, which lowers the albedo effect, which in turn causes the ground to absorb and retain more heat... well... fried eggs anyone? Not to mention what's happening in the Arctic, (which I will do shortly).

Here is what's happening globally over the same period. (Spring 2010).

The above graphic constitutes just the land surfaces. We can make that even prettier by blending land and sea surface temperatures.

Now you get a picture of a warming globe but the alarming part is what's happening to the northern most landmasses. Temperatures in the Arctic were 5 degrees C (9 F) above the seasonal normal. In fact, of eleven climate regions in Canada, five set new records for spring temperatures. Even the Pacific coast, which had the least above normal temperatures, was 0.7 degrees C above the 63 year normal.

Despite some people clinging to winter ice production in the Arctic as something significant, the spreading ice sheet was primarily first year ice or new ice. What happened in May was either shocking or depressing, depending on your mood. Arctic ice had experienced a late season growth through April and reached seasonal maximum almost a month late. In May the decline in Arctic ice showed how thin it was and the Arctic has experienced the fastest decline in the satellite record. 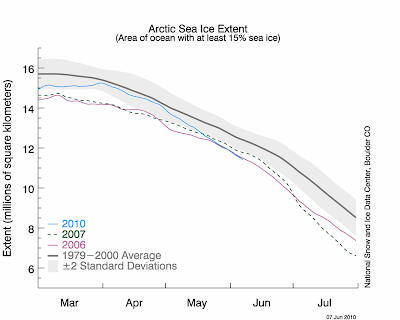 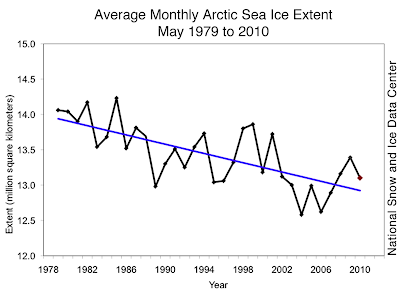 What we do not know is whether the Arctic sea ice extent will reach a new record low. It is simply too early to make that forecast and depends on varying meteorological conditions.

I mentioned earlier that the snow pack was melting rapidly. In May the North American snow pack melted faster in May 2010 than in any other May since records have been kept. In fact, Canada experienced the most rapid overall spring meltdown ever recorded. The change in the radiation reflection co-efficient further speeds heating at the surface.

There's a lot more interesting stuff that I could discuss but suffice to say, it's hot out there, and it's likely to get a lot hotter. And with heat the Earth will engage its natural cooling system - rapidly rising and expanding air. That can kick off some fairly significant meteorological events.

Rex... it didn't snow in Vancouver this year.
Posted by Dave at 16:00 Recommend this Post