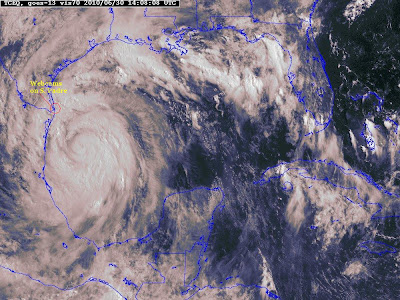 Update: 30/1445Z
Hurricane Alex has intensified slightly and is now well defined. Central pressure was measured at 961 millibars with an initial intensity of 70 knot (148 kmh/92 mph) winds at the surface.

This thing is a behemoth. As you can see from the satellite shot taken less than an hour ago, Alex occupies a huge portion of the Gulf of Mexico.

Alex has been upgraded to a Hurricane by the NHC. That makes it the first hurricane of the 2010 Atlantic season and the first June hurricane in that basin for 15 years. (Hurricane Allison) 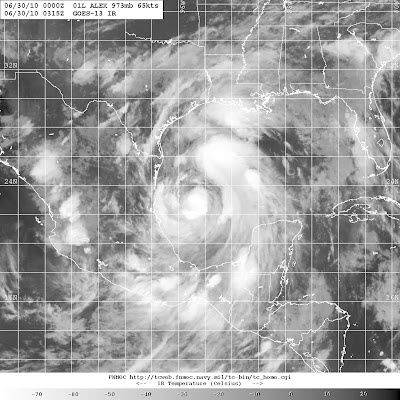 Alex will probably intensify before it makes landfall sometime Wednesday. The wind shear is below 10 knots, the sea surface temperature is extremely high and there is not enough dry continental air to stifle growth.

The central pressure has dropped rapidly to 973 millibars and surface winds have reached a sustained 65 knots (120 kmh/75 mph). The system has altered more to the west and is now tracking about 280 at 8 knots (15 kmh/9 mph). Intensification estimates vary but the official forecast is that Alex will remain a Category 1 Hurricane until landfall with sustained wind speeds of up to 80 knots (148 kmh/92 mph). 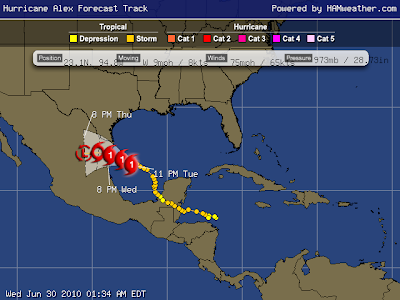 Landfall is a question. The track guidance provided by the models is quite wide so exact landfall predictions are difficult and of low confidence. The other thing is that this cyclone is huge. The radius of maximum winds is about 15 miles from centre, but the Tropical Storm Force winds have a radius of almost 3 degrees of latitude or 180 miles. That means that Alex will cut a wide swath into Mexico and Texas no matter where it makes landfall.

The storm surge is now expected to be around 5 feet in the areas of landfall and 2 feet or greater as far away as Louisiana. That will have a negative effect on the oil blowout area by driving the surface slick towards shore. Along with the surge of seawater and the high winds, Alex will probably drop huge amounts of torrential rain as it crosses the coast. Flooding is almost inevitable. These webcams right on the beach at South Padre Island should give us an interesting look.

Alex is expected to make landfall in less than 24 hours.
Posted by Dave at 22:40 Recommend this Post